Michael Haneke‘s Funny Games (Warner Independent, 3.14) is simultaneously the ugliest and most repulsive violent melodrama I’ve ever seen (including the thoroughly disgusting I Spit On Your Grave) and the smartest and nerviest critique of sexy-violent movies in the bang-flash vein of Quentin Tarantino, Tony Scott, Oliver Stone, Eli Roth and other purveyors and marketers of homicidal style. 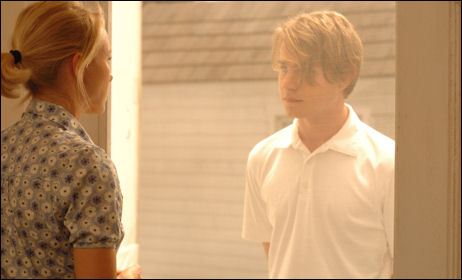 A fair percentage of those brave enough to see this Warner Independent release this weekend are going to walk out on it — trust me. It’s a hateful and infuriating film, no question, and yet it has a worthwhile point. And you can’t not respect Haneke for this.
It’s certainly one of the ballsiest movies ever released by Warner Bros. (technically Warner Independent) in its 90 year history. I mean this in a sense that average people might come out of showings feeling enormous hate for Warner Bros. for having done so. Seriously. If the final effect wasn’t so stunning and dispiriting I could imagine people beating up ushers on the way out.
It’s basically a chilly, creepy home-invasion horror story about two young, ice-cold psychopaths (Michael Pitt, Brady Corbet) who terrorize a couple (Naomi Watts, Tim Roth, Devon Gearhart) and their young son with the intention of gradually killing them. No theft, no ransom, no rape…just sadistic mind games followed by brutal maiming and then awful death. 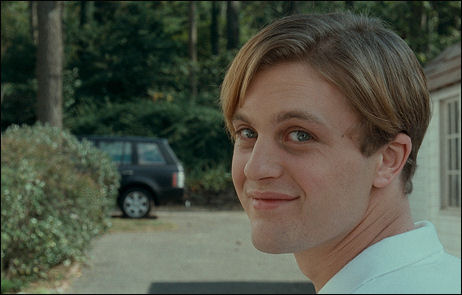 But it’s not a movie that pulls you into the story and persuades you to suspend disbelief and blah, blah. It’s strictly a “game” piece — an exercise film that feels real and naturalistic as far as it goes until it periodically pulls back, stops and tells you (in three instances with Pitt literally talking to the camera), “We’re wanking you off and trying to get you mad…get it? We’re making a point about all the violent gunplay movies you’ve enjoyed ad infniitum for the last 30 or 35 years, starting with The French Connection but particularly since the start of the Tarantino wave in the early ’90s. Violence is horrible, ghastly, reprehensible ….and it’s time for the all the little moviegoing children out there to wake up to this simple fact.”
Funny Games is a shot-by-shot, line-for-line remake of Haneke’s 1997 Austrian- based original. (Which I’m going to watch on DVD this weekend.) In the press notes Haneke says that “when I first envisioned Funny Games in the middle of the ’90s, it was my intention to have an American audience watch this movie. It is a reaction to a certain American cinema, its violence, its naivete…the way American cinema toys with human beings” and the way some of them make “violence consumable.”
What happens in the first 30 or 35 minutes of this film is so ugly and stomach- turning that I was starting to suffer an anxiety attack. I wanted to get up and walk into the movie, Purple Rose of Cairo-style, and shoot Corbet, whose face enraged me. His eyes and mouth especially. (If I see this guy on the street I’m going to have to take a breath and count to ten to keep from taking a poke at him.) I was muttering to myself, “This is the best argument for gun ownership and the NRA I’ve ever seen in a movie in my life.” 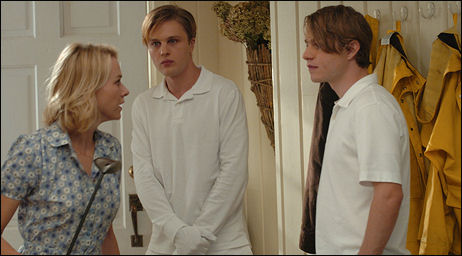 I’d love to get into particulars (there are ten or twelve aspects I’d love to sort through and dissect), but I’ll just get yelled at for spoiling. Fair warning: I’m going to discuss every damn aspect of this film that I feel like discussing, no holds barred, sometime on Sunday. No spoiler whining or squealing will be tolerated. If you want to get into it, see it on Friday or Saturday (a good idea regardless given the likelihood that this film is going to be gone very quickly) and get your ducks in order.