Roman Polanski‘s Venus in Fur was the final competition film I saw at last May’s Cannes Film Festival. Spoken in French, it’s a one-set, two-character piece (set inside a smallish theatre in Paris during an evening rainstorm) that began as an English-language play by David Ives. It was re-written by Ives and Polanski for the screen. It seems to mirror on some level the relationship between Polanski and his wife Emmanuelle Seigner, who costars along with Mathieu Almaric, who portrays the Polanski stand-in, a stage director, and who vaguely resembles the younger Polanski of the ’80s. Other than that it’s…well, I don’t want to abruptly dismiss any work by a great filmmaker but it really does feel like a minor work in a minor and restrictive key. Seigner delivers a snappy, saucy, highly-charged performance — I’ll give her that. 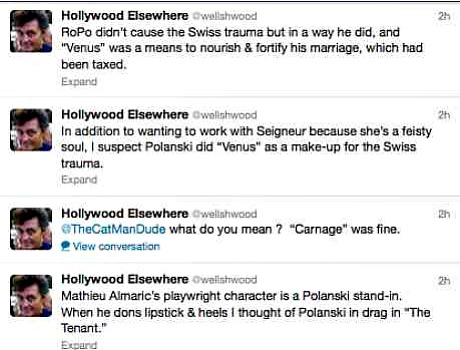