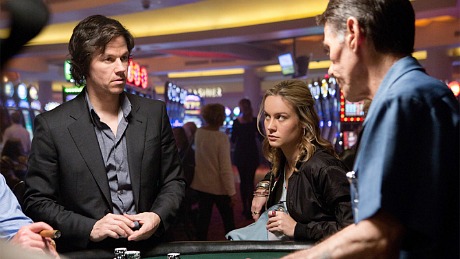 The ’74 Gambler was an atmospheric, ground-level New York thing for the most part with a side-trip to Vegas. It felt unpretentiously real and plain in the way that all of the better films of that era felt. You could almost smell the sweat and the car exhaust and the clams and the pizza. Gambler is a whiz-bang Los Angeles juice-packer with several interesting lines and characters, but it doesn’t feel connected to anything except a desire to stick a finger into an electric socket to see what it feels like and maybe get a nice “whoa!” or, you know, maybe die of a stopped heart. Nihilism, baby.

Monahan’s script contains one classic line about artistic struggle that Wahlberg delivers in his first classroom-lecture scene — “If you’re not a genius, don’t bother.” And John Goodman’s loan shark (the role more or less played by Paul Sorvino in the’74 version) delivers a great “fuck you“ speech in the third act. It’s basically a riff about how life is much, much better when you have enough ownership and financial security to say “fuck you” to any offer you don’t like. The crowd laughed heartily when Goodman said that United States of America “is basically built upon fuck you,” or words to that effect.

The ’74 version waited until the last act to put its main observation on the table, which is that most hardcore gamblers are looking to lose and sometimes be punished to boot. The last shot was of Caan looking at his face in a grimy bathroom after he’s been cut by a pimp’s knife. But the new Gambler offers this observation early on, almost as a so-whatter. And it uses what feels to me like a phony, studio-mandated third-act payoff about Wahlberg renouncing his obsessive habit (which is bullshit — gamblers have to manage their addiction like alcoholics) for the love of a good blonde (Brie Larson). By this I mean a smart but essentially submissive lady who’s also his student, and who serves no real function in the film except to be fetching and hang around.

Wahlberg plays the cynical, hard-bitten Jim Bennett with a certain obsessive rapaholic quality, but it’s not an Oscar-level performance because you don’t feel anything for the guy — he’s looking to lose so badly and conveys no satisfaction or interest, even, in the occasional win that viewer indifference is the only response. The real star is the under-used Goodman. As noted Larson has been handed the same kind of arm-candy girlfriend role that Lauren Hutton played 40 years ago, which she does a decent job with but to what end? As Wahlberg’s rich mom, Jessica Lange seems overly brittle and testy with very little in the way of what most of us would recognize as common maternal currents.

And the role of the protagonist’s rich grandfather, wonderfully played by Morris Carnovsky in the original, has been all but erased in the newbie. George Kennedy plays him for three or four minutes in the opening scene and then dies, and in so doing Monahan-Wyatt sacrifice a great poolside scene in the ’74 version in which the grandfather tells Caan, whom he regards as a man of thought and letters, to cut off his relationship with Hutton as “she’s not for you…she’s for a clubman, a playboy…not for a scholar and man of virtue.”

What is the point of making a movie about the psychology of gambling without getting into the highs? What gambler doesn’t live for “the heat”? I would never go there but I’ve seen and learned enough about gambling to know about the absolute rhapsody of being on a streak. So what’s the point of exploring gambling without allowing the viewer to taste this, to sample triumph over ruin because of an obstinate belief in a non-logical outcome? Fyodor Dostoyevsky‘s line about two plus two sometimes equalling five if the player wills it…how could that not be part of the scheme here?

In the ’74 film Caan’s Axel Freed, paraphrasing Dostoevky’s “Notes From Underground“, explains to his students that the free will to choose or reject the logical as well as the illogical is what makes mankind human. “Reason satisfies man’s rational requirements,” Caan says. “Desire, on the other hand, encompasses everything. Desire is life.”

During the post-screening q & a (which went on way too long and felt like one of those Santa Barbara Film Festival tributes, complete with a reel celebrating Wahlberg’s career highlights going back to the mid ’90s) Wahlberg said he recently showed his Gambler to Caan and that Caan had given his blessing. Caan may have done that, but he did so at least partly out of politeness or…you know, choosing the path of least resistance. Where would be the upside be in Caan telling Wahlberg, “Well, you know…it’s okay…you got some things right…it’s not too bad…you gave it hell and…whatever, it is what it is”?