So we’ve got the 35th anniversary of the debut of Steven Spielberg‘s Jaws coming up on 6.20. The trouble-plagued Universal release opened in 474 theatres on 6.20.75, and then expanded to 675 theatres on 7.25 — the biggest mass release of a film ever seen at the time. It earned a staggering $7 million the first weekend, and stayed at the top of the charts for the next five weeks, ultimately becoming the first pic to top $100 million domestic. 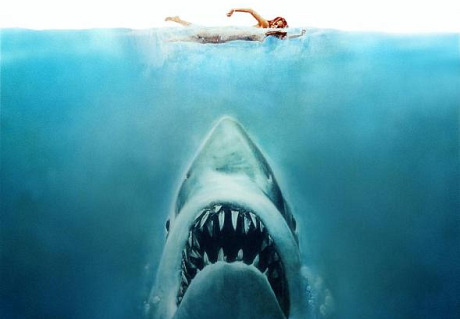 Jaws holds up fairly well, but it’s difficult to think of it these days as just a film. For years it’s been regarded (and not just by people like myself) almost as a kind of sentinel of tragedy, as extreme as that may sound. It ushered in the era of the mass-market, four-quadrant tentpole movie, and in so doing almost single-handedly (i.e., along with the success of Star Wars two years later) turned the film industry away from the idea of smallish or mid-sized movies with flavor and personality being a legitimate thing to invest in.

Jaws and Star Wars, in short, brought high-concept greed into the mix, and from this the interest of corporations in the potential for even greater profits to be made if movies could be sufficiently simplified and tailored to a younger audience. This in turn set in motion forces that wound up dumbing down movies and injecting a kind of virus into the Hollywood system that basically poisoned the whole game, leading to the ascension of tentpole auteurs and dumber plots and faster and faster cutting and hundreds of movies utilizing orange fireballs in action sequences.

This cause-and-effect has been recounted and lamented by many thoughtful chroniclers, and doesn’t need to repeated once again. But an anniversary is upon us and Jaws did do it — it let slip the dogs of tentpole hell, and movies have never been the same since.

I would probably buy a Jaws Bluray if one was available. The best DVD to own, of course, is the 30th anniversary edition that came out in ’05 which contains the full two-hour “Making of Jaws” doc, which is one of the very best of its type.