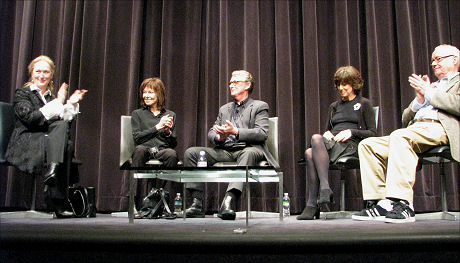 Nichols, Roy, Streep (star of Nichols’ Silkwood, Postcards From The Edge, and costar of Angels in America), May (Nichols’ comedy partner from the early ’60s), Ephron (screenwriter of Silkwood, Heartburn) and Henry (screenwriter of The Graduate, Catch 22, Day of the Dolphin) were onstage for roughly 75 minutes. Here‘s my edited mp3.

The beginning was a bit lurching and unfocused, I felt, and quite enjoyable for that. Roy asked a question that went on and on until he was stopped by Ephron when she said she was very much looking forward to hearing the question (or words to that effect).

Then Roy went in the other direction (i.e., under-explained) when he turned to May and said “perhaps you could talk to us about writing comedy, with Mike or with anybody?” May gulped, looked down, and said, “Uhm…if you could be a teeny bit more specific?” Huge laugh, mild embarassment. So Roy tried to elaborate but the words he was looking for weren’t quite materializing. And so Streep, feeling the angst and the struggle, suddenly chimed in and said, “Oh, I know what you’re trying to say!” And then she went off in her own direction.

Nichols debunked the auteur theory at one point, asserting that all films are collaborative efforts with dozens if not hundreds of people contributing in this and that way. 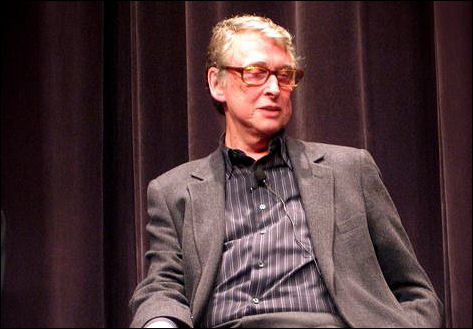 Streep recalled how Out of Africa director Sidney Pollack told her toward the end of shooting that he was sick of the physical chore of it all and that he couldn’t wait to “get back to Los Angeles and the editing room so I can make this movie.” Nichols, on the other hand, really loves the filmmaking process because of give-and-take familial atmosphere, and that he always gets a little gloomy when a film is about to finish.

Movies always take you back to the world in which they were made, Nichols said, but life has a way of overtaking them. “We ran Catch 22 just to check the print and it was almost like a documentary,” he said. Joseph Heller‘s book was fairly nervy and audacious for its time, he recalled, but “everything has caught up to it. The whole idea of everything being pure market forces [is] pretty much the way countries are run and certainly the armed forces.”

A question was asked about the casting of Dustin Hoffman in The Graduate. Nichols recalled a Mad magazine parody in which Benjamin Braddock says to his mother, ‘How come I’m Jewish and you and dad aren’t?’ I never said to myself, ‘I need a Jew here.’ But I needed an outsider. And then I thought of a guy that I saw in a play playing a tranvestite Russian…” Henry corrected Nichols by saying, “Actually a German tranvestite cripple. And [Hoffman] was totally convincing on all three things.”

Nichols spoke about how he’d screen-tested Robert Redford for the Braddock role, but told him over a game of pool later on that he was wrong for the part. “You were wonderful [in the test], I said, but you can’t play this part. ‘Of course I can!’ said Redford. No, you can’t, I said. You could never play a loser in a million years. ‘That’s not true!,’ he said. Then I asked him, ‘Have you ever struck out with a woman?’ and he said ‘what do you mean?'” 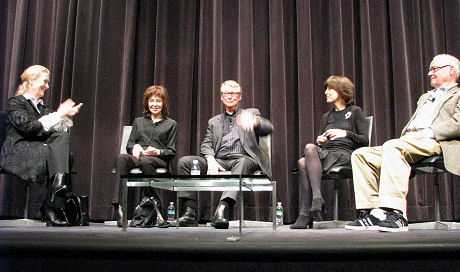 Nichols was born to German-Russian-Jewish parents (his given name was Michael Igor Peschkowsky) in Berlin, Germany, in 1931. His family moved to the U.S. in 1939 to flee the Nazis. He began as a comic performer, and the thing that gives Jewish comics their edge, I’ve always felt or sensed, is that they have acute feelings of dread and angst, which of course provide the fuel. I would have liked to hear Nichols expound on this, and to what extent the Nazis shaped his art.

I happened to see Natalie Portman, whom Nichols directed in Closer, on the way out. She and Christine Aylward will be co-hosting a Tribeca Film Festival event at the Soho Apple store on 4.24 in which they’ll discuss a new web project called ‘Making Of’ — a site that promises to transform the way people view, enjoy, and participate in entertainment.”