So I loved Chloe Moretz in Kick-Ass and the audacity of having an 11 year-old midget-sized girl murder dozens of bad guys with pistols and knives and swords, and I was also able to half-enjoy, at times, the suspended idiocy and self-referential absurdity that director Matthew Vaughn uses to explain away all the stuff that wouldn’t otherwise work and in fact would choke a horse.

Warning: Kick-Ass spoilers lie ahead. Spoilers, I mean, for those who haven’t watched the recent trailers and don’t know what the shot is and haven’t been to any comic-book action films over the last decade or so.

The problem for me is that hard-bodied, highly trained little girls like Moretz might be able to hurt or dodge or out-kick older heavier guys, but little girls are utterly incapable of whipping older, muscular, bigger-guys’ asses, and you can totally forget about these same whippersnappers wiping out several guys in one crazy-ass, stabbing, kick-boxing, balletic shoot-em-up and slice-and-dice. Even if you stretch physics like turkish taffy in an exaggerated fantasy realm, it’s completely ridiculous.

During the big finale Moretz’s Hit Girl becomes Neo in The Matrix. She wipes out 17 or 18 guys, if not more, and at one point dodges a bullet. (I think.) All comic-book action is lunacy, of course, but Kick-Ass takes things to a new extreme. It’s another exaggerated, self-mocking piece of ludicrous action pulp, only this time it takes you over the waterfalls. It’s not happening in a cyber-realm but a comic-book realm, which means that absolutely anything can happen and nothing matters. And yet in the minds of Vaughn and the geeks who are having kittens over this film, this is a cool way to go.

All they care about is the fact that Hit Girl rules. Which she does. I get that. I love Moretz in this thing. But we’ve come to a point in which the comic-book sensibility that allows her to run wild is ruining action movies. It’s been doing this for years, of course, but I was really fuming about this last night. “Where does this crap end?,” I was asking myself. “What’s next — a five-year-old action hero? How about a cat — not a cartoon cat Felix but an actual Siamese or Abyssinian or Tabby who shoots Glocks and beats the shit out of human hitmen and drug-dealers who are ten times his size and outweigh him by over 200 pounds? Why not?”

It’s gotten to the point that I’d like to arrest and incarcerate every last geek-pandering filmmaker and every last pudgy-bodied, ComicCon-attending comic-book fan and truck them all out to re-education camps in the desert and make them do calisthenics in the morning and swear off junk food and straighten their heads out about the real value of great action movies, and how their stupid allegiance to comic-book values is poisoning the well. 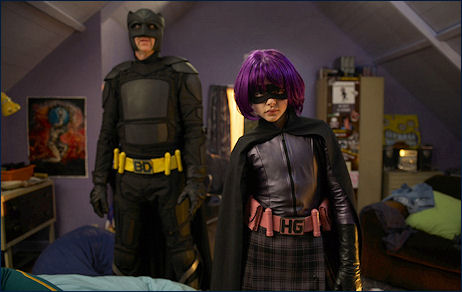 I’m sorry but Kick-Ass pushed me over the edge. I know I’m mostly alone on this. I understand that 94% of the mostly male, action-savoring audience is going to be more or less down with Kick-Ass and calling me clueless, etc. John Anderson, a very sharp critic and no slouch, was sitting in the front row of my screening and seemed to be half-chuckling and enjoying himself as the lights came up. I spoke after the screening to a respected critic for a well-known weekly, and even he was giving it a pass. I know it’s over. The temple walls are cracking. I realize that.

I’ve come to truly despise comic-book action flicks, and particularly the metastisizing comic-book sensibility in mainstream movies, for a reason. By this I mean the total disregard by comic-book filmmakers for setting up the rules and the reality system in which amazing things might happen within the world of a film. Just telling the audience “hey, it’s a comic thing” doesn’t cut it.

I am ready and willing to buy anything when I sit down for a movie. I will accept any bullshit premise you throw at me (even the idea of opening a small door, crawling through a mud tunnel, becoming John Malkovich for five minutes and ending up on the New Jersey Turnpike) as long as you allow me to buy it. Set it up for me…please! All I ask is that you pour the cement and bolt down the beams before making the film.

All the comic-book guys ever seem to say is “look, man…it’s cool to watch and it’s funny and has great CG…isn’t that enough?”

The current Comic-Con sensibility is primarily a product of (a) the Asian martial arts boom of the early ’90s, (b) the Quentin Tarantino hipster handbook (everything is smirky-ironic, all action is derivative and self-referential, violence is a style fetish, aping or referencing the sensibility of ’70s exploitation is a holy calling) and (c) the Robert Rodriguez B-movie, shameless-wallow sensibility in which macho action cliches are seen as eternally cool. Plus the influence of Marvel and Ang Lee‘s Crouching Tiger, Hidden Dragon and the sad willingness of the faithful to cream in their pants for pretty much any super-hero of any kind.

All these influences have grown into an attitude and a sensibility that is working like cancer upon the action genre. For it’s not just comic book movies but all action flicks that are covered with this sauce. 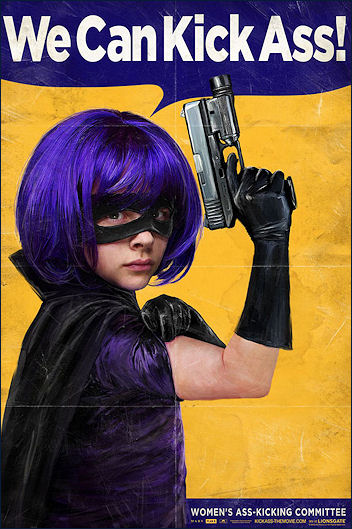 Every year there are more and more comic-book/fantasy movies and directors and writers who are not only opposed to but actively doing their best to undermine the concept of action you can believe in. By this I mean action sequences (including physical combat/martial-arts moves) taking place in a realm that the filmmakers have carefully prepared and guided and persuaded you to accept as semi-trustable and “real” as far as it goes.

I’ll always be cool with smart metaphor actioners like The Matrix, but I’m worried that we might be moving into a world in which there will be very little allegiance or respect for the kind of violence that really hurts and bruises and is scary to face. A world in which guns fire randomly or accidentally (remember that bit in Out of Sight when the guy fell on the stairs and shot himself?). And has foot chases that involve fatigue and heavy breathing. And beatings that bear at least a slight resemblance to schoolyard or back-alley beatings that you might have observed as a kid in which guys don’t get clobbered so hard and so often that they’d be dead in reality, or at least maimed for life.

The vast majority of action films used to live by the realism creed. Now it’s pretty much the exception to the rule. Many if not most action films these days are committed to the willfully surreal if not absurd. They’re all angled towards aficionados of Asian sword-and-bullet ballet. We seem to be fast approaching a time in which the Wachowski brothers’ The Matrix, Tony Scott‘s Man on Fire, Phillip Noyce‘s Clear and Present Danger and Patriot Games, Wiliam Friedkin‘s The French Connection, Kathryn Bigelow‘s The Hurt Locker, Fernando Meirelles‘ City of God and Alfonso Cuaron‘s masterful Children of Men will be seen as icons of a bygone age.

Comic-book action filmmakers aren’t fit to shine Cuaron’s shoes. They aren’t fit to wipe up phlegm that he spits on the sidewalk when he has a cold. All they’re fit to do is follow the system that we have in place in which the director of the next comic-book movie feels obliged and is in fact eager to top the last director of the last comic book movie, but always without setting it up — they just do it, knowing that the ComicCon and South by Southwest faithful will lap it up and yell “Yeeaahhhh!”