When I first heard a few weeks ago about screenwriter Stephen Schiff writing a Wall Street 2 movie, I wrote him with some questions. I said there’s a competitive element afoot with Martin Scorsese and Leonardo DiCaprio cooking up a rise-and-fall-of-a-Wall Street-hustler story — an adaptation of Jordan Belfort‘s upcoming tell-all autobiography “The Wolf of Wall Street.” And I was wondering if Schiff’s piece was going to be something different or familiar. 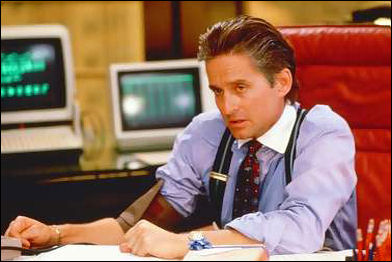 The familiar would be another tale about a twentysomething money-hungry guy (a) gaining entry to the world of high finance, (b) learning the ropes, making big bucks and getting a little drunk on the juice of it all, and (c) eventually going too far, getting busted and crashing into a hole of shame and disrepute.

Schiff, ill and on a writing deadline, asked if we could talk later, and I said sure. And then yesterday along came a piece about the film by N.Y. Times guy Michael Ciepley, using producer Ed Pressman and actor Michael Douglas as the on-the-record sources. Schiff’s script is called Money Never Sleeps and will be, according to Ciepley’s story, about a “restyled” Gordon Gekko, to be played again by Douglas.

Gekko’s character arc won’t be emphasizing “moral development.” He’ll be the villain of the piece, in other words. There was no mention of a good-guy character, if in fact the film intends to use one.

I have no idea whether or not Money Never Sleeps has a good or poor chance of coming out before the Scorsese-DiCaprio film (Schiff will deliver the script “later this year”), but they should probably get the lead out just to be on the safe side.