When I say I hate “dumb comedies,” I’m referring to comedies that pander to the mentality (if that’s not too sophisticated a word to use in this context) of simian-level moviegoers who love films like Balls of Fury. But if a comedy conveys the attitude and world-view of characters who are really and truly idiotic (and can’t help it or don’t care that they’re so afflicted), then I collapse into helpless spasms. I love stupidity, but only the kind that’s earnest and convincing. 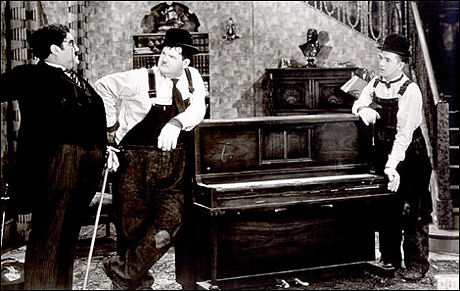 Parts of Dumb and Dumber are hilarious to me. Ditto Bill Pullman‘s “dumbest guy in the world” character in Ruthless People. I worship The Music Box, that classic Laurel and Hardy short about trying to deliver a piano in a big wooden crate. That moment in William Friedkin‘s The Brinks Job when Allen Garfield opens up a storage-room door at a gumball factory that a sign on the wall says to not open….hilarious.

My all-time favorite stupid line is in What’s Up, Tiger Lily? when that colorfully- dressed Oriental warlord shows Phil Moskowitz a small map and says, “Here is Shepard Wong‘s home” and Moskowitz replies, “He lives in that piece of paper?”

Please don’t list scenes that show run-of-the-mill stupidity. “Stupid” isn’t funny unless a character (or characters) really mean what they say. We’re talking about serious conviction, about dumbness that is solid and genuine…not affected or used as an “act.”