I saw Lasse Hallstrom‘s The Hoax (Miramax, 4.6.07) last night in Westwood at a “special screening” (i.e., red-carpet photography but no after-party). It’s not without problems (or should I use the word “issues”?), but it’s not half-bad. The seams show from time to time (the budget was lean), but it’s better than decently made. A low-key caper movie-slash-ethical drama, The Hoax never once pissed me off, and that’s saying something by today’s standards. 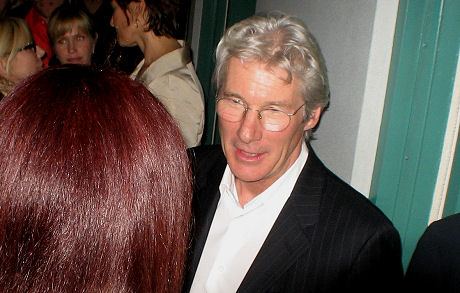 Set in the early ’70s, it’s about how author Clifford Irving (Richard Gere, giving one of his vigorous, all-out performances in the vein of Mr. Jones or Breathless) flim-flammed most of the world (including book publisher McGraw-Hill) into believing he’d persuaded reclusive wackjob billionaire Howard Hughes to tell all for a definitive autobiography.

An actor named Michael J. Burg is billed as having played Truman Capote in the film — to the best of my recollection this performance isn’t in the film. Milton Buras is also credited on the IMDB for portraying Howard Hughes — his performance must have been cut out.

Irving has been quoted as saying, “I had nothing to do with this movie, and it had very little to do with me.”

When I think of Irving (whom I interviewed in the ’90s — I forget about what), I think of him lying on a sunny beach in Ibiza with Nina van Pallandt. But there’s no Ibiza stuff in the film — almost all of it was shot in and around New York City with some extra lensing in Puerto Rico