Because the title of a hit TV show from the mid to late ’60s called Get Smart is still a semi-recognizable brand (primarily among boomers and older GenXers who were in their early tweens to late teens when “would you believe…?” was a cool catch phrase, and who are now in their 40s, 50s and early 60s), Warner Bros. is making a Get Smart movie with Steve Carell and Anne Hathaway in the Don Adams and Barbara Feldon (i.e., Agent 99) parts. 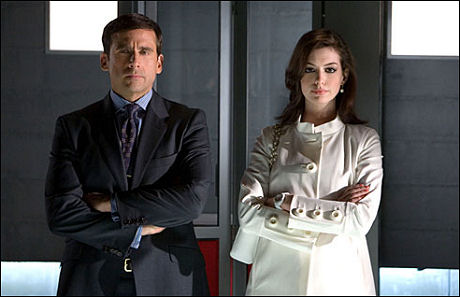 USA Today‘s Anthony Breznican has written a totally boilerplate, just-the-facts piece about it,

The new Get Smart is reportedly an origin story about how Carell’s Maxwell Smart got to be a top secret agent and work for CONTROL, etc. (Alan Arkin is playing the chief with Hathaway as Agent 99.) The baddie-waddie org known as KAOS is back also, along with the shoe phone and the Cone of Silence. The world of the mid ’60s (James Bond spoofs, the Hugh Hefner aesthetic, threat of Russian and Chinese communism, boning the babes, dry martinis, Ford Mustangs) transferred to a world that has next to no relation to the one that existed 40 years ago.

All in an effort to sell tickets (a fundamental reason to make a film, obviously, but one that ensures a rancid and empty vibe if that’s primarily what the makers are thinking about) and make people like me miserable.

You can”t go home again. The mid to late ’60s can’t be re-animated and re-alchemized, and 40 year-old TV shows don’t mean much to anyone under-40 who doesn’t watch Nickleodeon. Or do they?

To increase the offensiveness, the producers have Peter Segal — the grinning go-alonger with the Adam Sandler relationship and, okay, a certain facility with lightweight comedy (50 First Dates, Anger Management, Nutty Professor II: The Klumps, Tommy Boy) — directing it.

The problem is that Segal is just a breezy-ass hah-hah guy — no apparent “taste” or seasoning or underlying whatever. I don’t know if the producers approached Jay Roach or Richard Linklater (or if these guys felt that Get Smart was beneath them and blew them off…I would have). But if the producers had any interest in making something that wasn’t intended as a total wank from the get-go, they wouldn’t get Segal. (How about someone like Jon Favreau or…I don’t know….Christopher Guest?)

How would you like to be Segal and know that you’re directing a movie that’s regarded by your top stars as a straight hold-my-nose, do-the-job and get- through-it-so-I can-pay-for-my-children’s-education type gig?

Carell has now officially squandered the good will and positive associations he had in his pocket all last year as a result of his extremely winning, ground-level comic performance in Little Miss Sunshine. It’s over and he’s pissed it away. His image (doubly fortified by Evan Almighty) is now that of a complacent and obedient clown who makes corporate comedies for guys in suits as long as you pay him enough.