A rich, extremely successful actor-director has a rep of being a bit of a conservative goony-bird, or at least a guy who’s staunchly religious and off on his his own philosophical beam. (I’m not saying it’s in any way weird to be a hardcore Catholic with a Holocaust-denying dad. It’s allowable in a free society, and if this is what works for the guy, fine.) 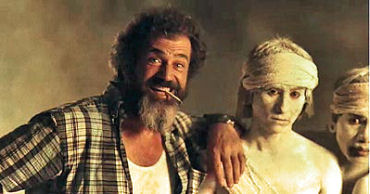 Let’s also say this actor doesn’t like being thought of as an oddball and wants, perhaps on a subconscious level, to let people know he’s not some ultra- Catholic tight-ass and is just as much of a flawed effed-up guy as you or me. What would be one way of doing that? If you ask me, getting popped for a DUI at 2:30 ayem is just what the doctor ordered.