Capitalism: A Love Story — the just-announced title of Michael Moore‘s global financial meltdown doc — works for me. It’s a little beside-the-point, a little bit of a “come again?”…but it’s fine. I mean, why squawk about it? Why be a contrarian by suggesting that a more accurate (and arguably catchier title ) for Moore’s film would be Reagan: A Love Story? 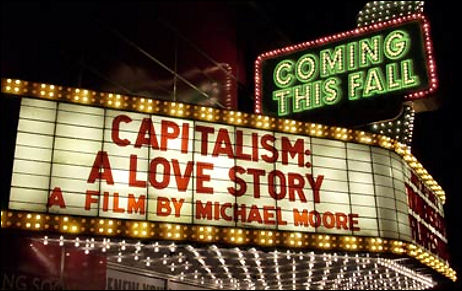 The crisis that kicked in last fall and which will, in all likelihood, submerge this country in a Japanese-styled recession slumber for many years to come, is not, of course, a creation of capitalism per se. It’s a result of a pattern of free-for-all economic speculation and debt-splurging and wild-west profiteering that began with the policies of Ronald Reagan.

N.Y. Times columnist Paul Krugman explained it all on 5.31, in a piece called “Reagan Did It.” “The more one looks into the origins of the current disaster, the clearer it becomes that the key wrong turn — the turn that made crisis inevitable — took place in the early 1980s, during the Reagan years.

“Attacks on Reaganomics usually focus on rising inequality and fiscal irresponsibility. Indeed, Reagan ushered in an era in which a small minority grew vastly rich, while working families saw only meager gains. He also broke with longstanding rules of fiscal prudence.

“On the latter point: traditionally, the U.S. government ran significant budget deficits only in times of war or economic emergency. Federal debt as a percentage of G.D.P. fell steadily from the end of World War II until 1980. But indebtedness began rising under Reagan; it fell again in the Clinton years, but resumed its rise under the Bush administration, leaving us ill prepared for the emergency now upon us.

“The increase in public debt was, however, dwarfed by the rise in private debt, made possible by financial deregulation. The change in America’s financial rules was Reagan’s biggest legacy. And it’s the gift that keeps on taking.”

Moore said yesterday that Capitalism: A Love Story “will be the perfect date movie. It’s got it all — lust, passion, romance and 14,000 jobs being eliminated every day. It’s a forbidden love, one that dare not speak its name. Heck, let’s just say it: It’s capitalism.”

Heck, let’s just really say it: it’s unbridled yeehaw Reagan- and Dubya-styled deregulation . It’s “let’s make the opportunities as lavish and imperial as possible for our rich Wall Street buddies so they can take care of us while we wrap ourselves in the flag and old-style Christianity and family values and stir up the yahoos by railing against gay marriage and abortion, etc.”