In an 8.13 L.A. Times article, John Horn reported that “because ticket buyers prefer escapist fare these days, [they’ve] been reluctant to swim to The Cove, a documentary on Japanese dolphin-killing that has some of the year’s best reviews. Despite a ton of publicity, The Cove labored after expanding into limited national release last weekend. Roadside Attraction’s Howard Cohen admits that ‘when people hear there is violence against animals, it’s tough for them to think about it…but the concept…is much more off-putting than the experience of watching it.'” 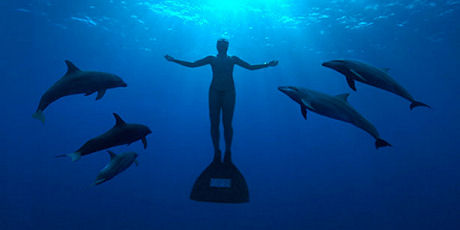 Methinks Cohen and Horn are side-stepping the nub of it. When they say/report that “people” are squeamish about seeing The Cove, what they really mean is that a fair amount of women are pretty much boycotting it. My head and my gut have been telling me for weeks that for every impassioned woman who will attend The Cove because she cares about the plight of dolphins and wants to feel and do something that might help the cause in some way (like my dolphin-loving friend Gini Kopecky), there are nine others who are saying to their girlfriends/dates/ boyfriends/husbands, “No way…can’t watch that…too much.”

Please present any sort of observational evidence that indicates I’m wrong. I haven’t polled a cross-section of a couple of hundred women or hired a research firm to do same. I just know what women are like when it comes to blood. Sorry.

Women call the shots when straight couples go to the movies. Guys can be harassed or cajoled into seeing a flick they wouldn’t otherwise catch on their own, but if a woman doesn’t want to see a particular film…forget it. End of discussion, wasting your breath. Which is why good-movie-seeking, green-minded guys aren’t pushing their girlfriends/ wives to see The Cove with them — they know it’s futile. Which is why The Cove is falling off the radar. Tell me I’m wrong.

I warned/half-predicted this might happen two or three weeks ago but I can’t find the corresponding HE story/item. (I spent ten minutes searching for it under various search criteria…zip.) I know I’ve had at least five or six conversations with women since I wrote this (including two Brazilian women I spoke with during the InFilm tour) and they all said they had strong reservations about seeing The Cove because they don’t want to see Flipper harpooned to death.

Cohen told Horn that Roadside Attractions “will revise the film’s advertising campaign, showcasing more of The Cove‘s critical plaudits than some of its more troubling elements, most of which are confined to the film’s final five minutes.”

Postscript/update: I wrote the following on 7.18 in response to a comment asking why I suspected that women won’t be attending The Cove: “Outside of female artists and female edge-junkies and female adventurers and other self-defined X-factor types, have you ever known a woman who didn’t instinctively flinch and turn her head away from violence, particularly violence visited upon defenseless animals?”