Give Brad’s Zombie Flick A Break

The gist of yesterday afternoon’s World War Z piece by Deadline‘s Michael Fleming is that the super-costly Brad Pitt-Marc Forster zombie film (a) is, according to Fleming, no John Carter and no Battleship, (b) in the opinion of Fleming, who was recently shown the film in NYC, it’s “a rocking, smart, pulse-pounding big-scale pandemic with raging zombies, tension and the kind of hero[ic] star turn Pitt hasn’t done in a long time,” and (c) it’s been unfairly tarnished for re-shooting its last act when doing nothing to improve the film would have resulted in a more positive (or at least more neutral) advance buzz. 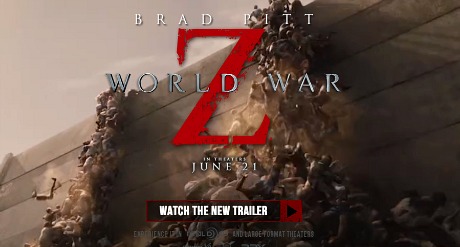 There’s a lot more information, but the piece is basically an interview with Paramount vice-chairman Rob Moore as he tries to turn things around by being ultra-candid in hopes of perhaps setting the record straight. Give us a fair shake, people…c’mon! Okay, I’ll give it a fair shake. Paramount is opening World War Z on 6.21.

Excerpt: “Each time I told someone I’d seen it, the response from industry insiders was a version of, ‘Well, just how bad is it?’ Paramount invited me and a handful of others to see it, as they begin the daunting campaign of rehabilitating the film’s battered image. I don’t know if I would have written anything had I hated the movie, but it’s easy for me to write this because I consider myself a connoisseur of zombie fare, and this stacks up very favorably.”

Due respect to Fleming but I don’t want to hear a thumbs-up from a “connoisseur of zombie fare.” I want to hear a thumb’s up from a guy like myself, a mildly cranky, film-cultured smarty-pants who can take or leave zombie films as they come, who has no investment pro or con.