Give Truth A Break

There are 42 Rotten Tomato reviews of Rod Lurie‘s Nothing But The Truth, representing the big-city snoots who had a chance to see this sharp and tight journalism drama before distributor Bob Yari fell into Chapter 11 and Truth became instant road-kill. First-rate film, tough deal. 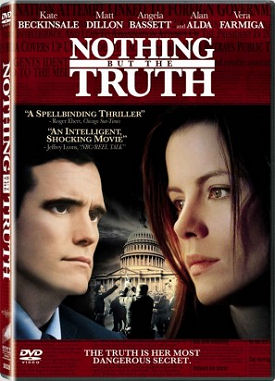 I understand there are some regional and hinterland film critics who plan to review the Nothing But The Truth DVD as a brand-new feature when it comes out on 4.28. That’s a good and gracious way to go, I feel. Lurie’s film deserves all the benefits of a theatrical opening, including reviews by top-tier critics.

And by the way, Truth isn’t being given a Bluray release after all. The Sony Home Video folks obviously don’t believe it warrants the extra expense. Too talky, not enough action, no tits-and-ass.