In the eyes of history, the SJW toxics (or, if you will, the virtue-signalling Stalinists) lost last night. Their bullshit is evaporating into vapor as we speak. They can stomp and whine and punch the refrigerator all they want, but Green Book took all their slings and arrows and won the Oscar anyway.

But before we put this stinking battle to bed, a final word from Variety‘s Owen Gleiberman, who liked Green Book as much as I did and lamented the relentless p.c. putdowns:

“Set in 1962, Green Book is a feel-good liberal buddy movie that’s like a cross between Driving Miss Daisy and Rain Man, and 20 years ago it would have been a slam-dunk Oscar triumph. 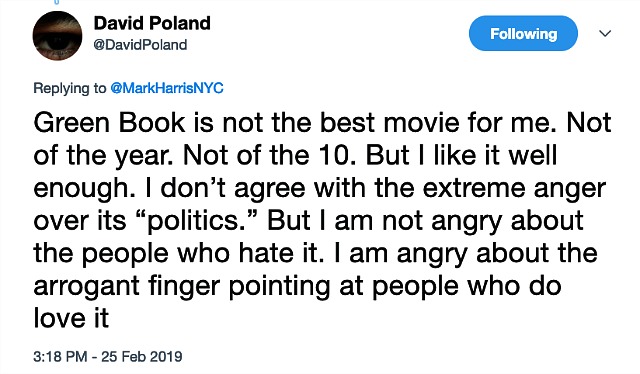 “As someone who believes that Green Book is a powerful, moving, and emotionally complex film, I’d push back against that argument by saying: The movie isn’t equating the experience of black oppression and white blindness. It’s saying that they co-exist in the world — and that for the purposes of this movie, it will give them equal screen time.

“My point here is not to re-fight that fight; it’s simply to say that Green Book is a film that got transfigured in the culture. It started off as unabashed liberal comfort food; it ended up as a movie that divided as much as it united. It became a political hot potato, and so voting for it wasn’t simply like pulling the lever for Driving Miss Daisy or Rain Man — for the kind of intimate and uplifting relationship-of-opposites heart-tugger that has often triumphed at the Oscars. Voting for it became, at least for some Academy members, a political act in a different way: a knowing defense of what’s left of the Hollywood status quo. It became a rebellion against the rebellion.

“You could say, of course, that the victory of Green Book came down to one elemental thing: A lot of people in the Academy really loved Green Book. Fair enough. But my point is that its win last night still played as an upset, as the triumph of the underdog.

“How could it not when Green Book, by the time Oscar night arrived, had been battered by so many storms and scandals? The N-word flap, the Muslim-tweet flap, the Peter-Farrelly-used-to-flash-on-the-set flap, the fact that the film’s box-office performance never quite lived up to its billing as a ‘crowd-pleaser’ — individually, each of those elements dinged the movie, but what became meaningful was the way they converged with, and seemed to reinforce, the criticism of the movie: the idea that there was something questionable about Green Book.

“It had become less a mainstream juggernaut than a giant killer.” 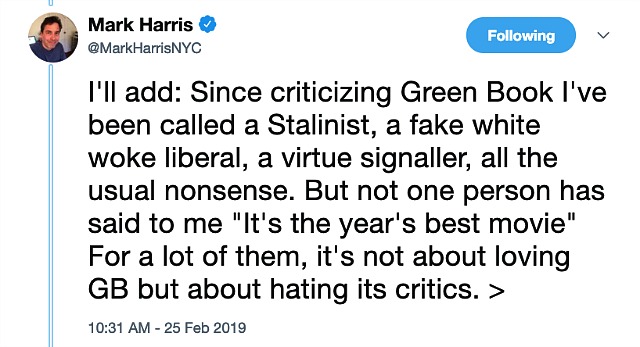