Later this month Warner Archives is releasing a modestly-priced Bluray of Peter Ustinov‘s near-great Billy Budd (’62). 11 years ago I posted the following about a Warner Home Video DVD version:

“Black-and-white CinemaScope is one of my favorite visual formats, and what an exquisite and luscious silver-toned transfer this is — spotless, velvety smooth, ultra-crisp perfection with each carefully-lighted value and tiny detail on view, and assembled exactly right. The cinematography is by Robert Krasker (The Third Man, Odd Man Out, El Cid, Fall of the Roman Empire).

“The film itself is taut and intelligent and finely sculpted. If you have the patience to get into a film that delivers in an exacting, step-by-step way and which uses the technique of just-so dialogue and characters that build and build upon themselves, it will hold you every step of the way. 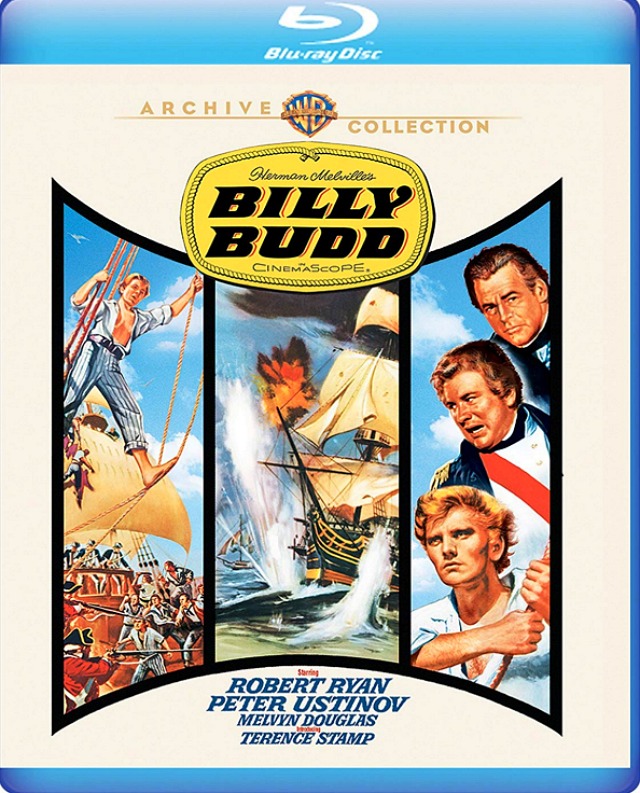 “The dialogue is plain and straight in the way that seamen and gentlemen officers presumably once spoke (‘I’m sorry for the manner but not the matter’), but heavy with the irony and immense sadness of Herman Melville‘s classic tale, which is basically about a meeting of child-like innocence and craggy evil aboard a British warship in the 1790s.

“And the performances! Much better than I remembered them, especially Robert Ryan‘s Claggart , Melvyn Douglas‘s wise old Danish sailor (‘I look around this room and sense…finality’) and Terence Stamp‘s Billy — one of the more striking debut performances ever.”

Claggart: “The sea is calm, you said. Peaceful. Calm above…but below a world of gliding monsters, preying on their fellows, murderers all of them. Only the strongest teeth survive. And who’s to tell me it’s any different here on board or yonder, on dry land?”