Yesterday was one long bike-riding orgasm through the streets of Hanoi. It was heaven. There’s something rhapsodic about being one of hundreds of scooter riders, bicyclers, car, bus and truck drivers making their way down a major boulevard. There are no bike lanes — you’re just pedaling your way through it all, everyone making it up as they go along, and I’m telling you it’s like you’re part of some glorious, brass-band holiday parade.

The difference here is that Hanoi pedestrians aren’t standing on the curbside and going “wow, look at that!” They’re just shrugging it off, the usual rumble of daily life. But to me (and, I’m sure, to Jett and Cait) it was like being part of a huge skilled orchestra playing a great improvised symphony, and being part of it yesterday was absolutely one of the most delightful experiences of my life.

Otherwise we had two culinary orgasm sit-downs — lunch at Bun Cha Dak Kim where I had the most delicious springs rolls of my life, spicy and greasy and bursting with flavor, and dinner at Pho Thin, where they only serve bowls of Tho — clear stock, boiled beef, rice noodles, herbs, green onions and garlic. They only charge a little less than $2 U.S. a bowl, but it’s one of the greatest bowls of anything you’ve ever eaten in your life. 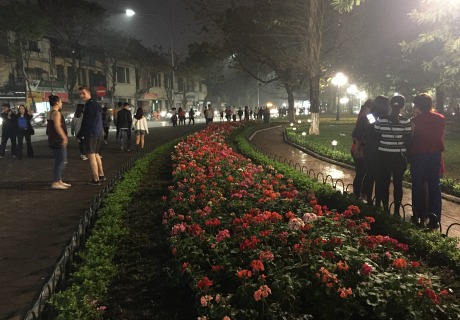 Jett and Cait (left side of photo) in a park alongside Hoan Kiem, the smaller of two lakes in central Hanoi. 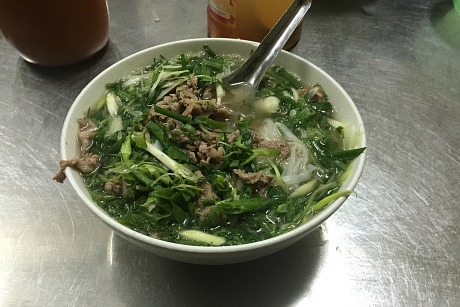 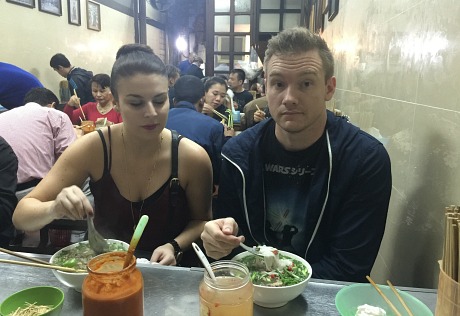 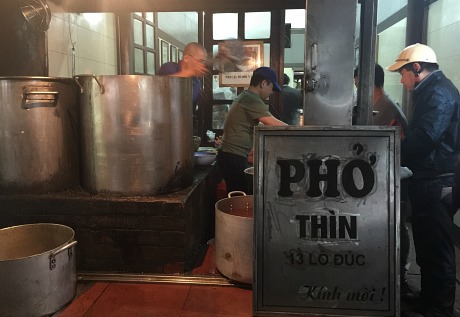 “Steaming bowls of pho are everywhere you look in Vietnam, from humble street stalls to upscale hotels. But Pho Thin, on tree-lined Lo Duc in the historic French Quarter, offers an unusual take on the ubiquitous noodle soup. Its reputation stems from an innovation owner Nguyen Trong Thin made when he opened the cafe in 1979. During the post Vietnam-war era, food was rationed, so the former painter hit upon a way to add new flavor to standard pho by adding garlic. This seemingly minor change completely transforms the flavour. ‘We didn’t have much to eat. But I still thought making good food was an art,’ says Thin.” — from Lonely Planet article on Pho Thin.