Glover Is On To Something

Atlanta creator, star and sometime director Donald Glover believes call-out culture is diminishing or dulling down creativity in movies and TV series. “We’re getting boring stuff and not even experimental mistakes because people are afraid of getting cancelled,” Glover tweeted. “So they feel like they can only experiment with aesthetic.”

Glover was responding to Twitter users who’d complained about feeling deflated and bored due to too many cookie-cutter films and TV series. Yeah, he said — that’s because terrified screenwriters and show runners are afraid to step out of the box and risk offending Twitter jackals.

Some of the usual rationales were posted in response. Scriptwriter Lisa Hofacker reminded that “(1) There are only 7 basic plots so only so much can be done & redone with that in mind, and (2) script reviewers basically only review the 1st 5-10 pages of a script…if it doesn’t have the inciting incident or exciting enough it gets thrown out.” 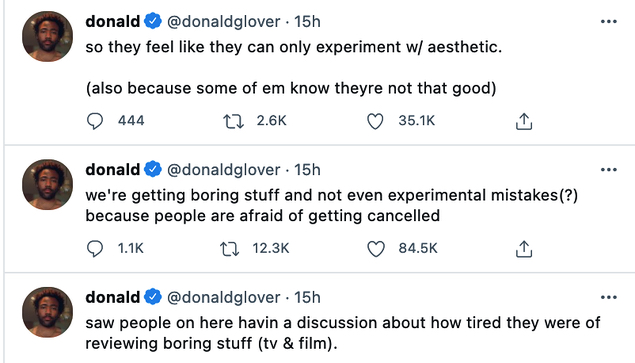 The proverbial “inciting incident” has to happen within five to ten pages? When I took Robert McKee‘s class in ’88 the inciting incident had to happen no later than 25 pages in, and preferably within 20 pages.

Not to discount Hofacker or even McKee, but Glover’s tweets sounded a lot like something I tapped out a couple of months ago. At the risk of irritating regular readers, here’s the gist of it:

From “Wolfe Reminds, History Repeats,” posted on 3.22.21: “For since wokeness began to take hold in ’18 and certainly since the pandemic struck 13 months ago, the movie pipeline has been losing steam and under-providing, to put it mildly. Nothing even approaching the level of Spotlight, Manchester by the Sea, Call Me By Your Name, Dunkirk, Lady Bird, La-La Land, the long cut of Ridley Scott‘s The Counselor, Zero Dark Thirty or Portrait of a Woman on Fire has come our way from domestic filmmakers. **

“Wokeness might be good or (sadly) necessary for social change, but it’s not much of a propellant for the creation of knockout award-season flicks that really reach out and touch Joe & Jane Popcorn.

“The bottom line is that the erratic pursuit of sweeping, penetrating, soul-touching art (a rare achievement but one that has occasionally manifested over the decades) has been more or less called off, it seems, because such films or aspirations, in the view of certain #MeToo and POC progressives, don’t serve the current woke-political narrative.”

In January 2019, “The Coddling of the American Mind” author Jonathan Haidt explained the general woke perversion and derangement thing in less than four minutes.

Cancel culture insanity “all started in 2014…most of your listeners have heard about safe spaces, micro-aggressions, grievance studies, biased response teams, trigger warnings…all of that stuff didn’t exist before 2014. It all began creeping in [that year], and then sort of blew up in 2015. Why did this happen? There are six different causal threads…all these trends, some going back to the ’80s and ’90s, and came together around 2014.” Fascinating stuff.