L.A. Times industry pulse-taker Patrick Goldstein has drawn on the familiar analogy between Oscar campaigns and Presidential election campaigns, and suggested with some humor what certain attack ads might sound like if Hollywood marketers were to imitate the tactics of big-league election strategists without reservation. 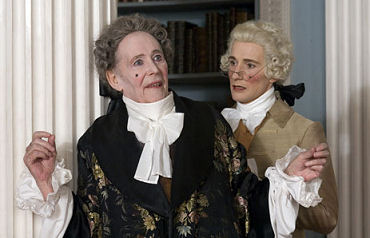 “The two worlds are eerily similar,” Goldstein observes. “When it comes to winning an Oscar or an election, shrinking violets need not apply. In fact, it’s gotten to the point that if you stay home instead of shamelessly showing up at every party in town, as Peter O’Toole has this year, the bloggers start speculating that something is amiss, as if you have to work the circuit to be taken seriously. God forbid anyone would allow a performance to speak for itself.”
That last sentence is a partial reference to a 12.2 piece I wrote about O’Toole’s no-show strategy, which may be less of a strategy than a fall-back situation dictated by health factors. O’Toole is a great actor and sublime in Venus, but he’s on the verge of losing the Oscar because of his absence — trust me. He’ll probably be nominated, but every insect antennae vibration is telling me he won’t win. I love the guy and I hope I’m wrong.
Maybe later-is-better will turn out to be a brilliant move (the plan earlier this month was for the ailing 74 year-old actor to turn up in Los Angeles in mid-January), but O’Toole, let’s face it, is not exactly Will Smith — i.e., not a chummy-shmoozer type and therefore not a widely beloved figure — and the fact is that he could probably do with a little flesh-pressing and image-buffering. On top of the fact that reactions to Venus have been admiring and respectful, yes, but not 100% ecstatic.
This last statement is the crux of the matter. Venus is a smallish, low-budgety watercolor movie, and I keep hearing that it isn’t knocking people dead. Plus an Oscar blogger I spoke to earlier today assured me that women aren’t likely to vote for O’Toole because the notion of a randy septugenarian with a thing for a young lassie will strike them as somewhat distasteful, or certainly not very appealing.
I like this Goldstein line, however: “If the National Board of Review of Motion Pictures award winners are the equivalent of the Iowa caucuses, then the New York and Los Angeles Film Critics awards represent the New Hampshire primary.”
One more comment about Goldstein’s remark that “God forbid anyone would allow a performance to speak for itself.” Of course, Roman Polanski never left Paris during the ’02-’03 Oscar season and his direction of The Pianist did speak for itself, despite a whisper campaign that tried to discount him over his mid ’70s legal troubles. And glory hallelujah — the haters and the whisperers lost.