Goldtsein gives it to King

Patrick Goldstein‘s latest “Big Picture” L.A. Times column is about CNN talk-show host and whorish, suspender-wearing blurbmeister Larry King. Talk about shooting fish in a barrel, or is it more of a case of “give him enough rope…”? 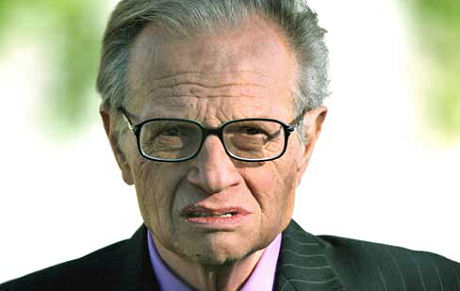 Goldstein is, I feel, derelict by failing to mention a clearly understood fact: when a movie ad uses a Larry King rave, it’s an almost-certain tipoff that the movie has problems. Anyone with half a clue about the movie business understands this.

“King sometimes will even blurb a movie he didn’t like,” Goldstein observes. “At lunch, he told me of the time he and Shawn Southwick, his sixth wife, took their two boys to see Pirates of the Caribbean: Dead Man’s Chest. ‘I had no idea what was going on,’ he says. ‘I turned to my wife and said, what is this movie about? I don’t get it.'”

(I get it. POTC: DMC is basically about the sheer wondrousness of Gore Verbinksi‘s creative vision and relentless perfectionism, no matter how long the final cut runs, plus producer Jerry Bruckheimer‘s refusal to step in and argue for brevity or conciseness of any kind.)

“But when I dug up King’s old blurbs,” Goldstein writes, “guess who was at the top of the ad for the movie, enthusing: ‘Finally, a Movie Worth Seeing Over and Over Again!’ Larry! I thought you didn’t like the movie!

“‘I didn’t,’ he explained. ‘I told the CNN person to tell the studio, ‘I didn’t understand the damn movie at all. I’d have to see it over and over again to figure out what happened.’ And then they went and used it!’ 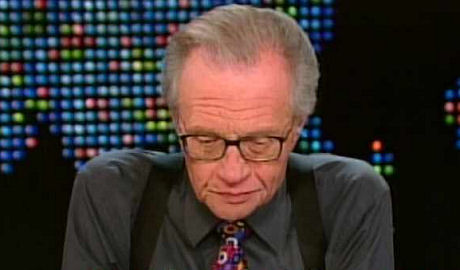 The following five graphs, which appear at the end of Goldstein’s article are priceless:

“[King] still can’t get over the fact that All the King’s Men, his idea of an Oscar picture, was slammed by critics. ‘What was wrong with that movie?’ he asks. ‘I don’t get it. How could they knock Sean Penn, who is our best film actor today? The girls were great. Jeez, they even rapped Anthony Hopkins!”

King complains that critics would rather pan a movie than praise it. “That’s what I don’t get about ’em,” he says. “It’s like they don’t even want to like the movie. I have a confounding time with a guy like [The Wall Street Journal‘s] Joe Morgenstern. Sometimes I don’t even know what he’s looking at.” King is still upset that the critics bashed The Holiday, calling it corny and sentimental. ‘What — is sentimental such a bad word?’ he says. ‘If a movie makes you cry, it has to have moved you. I cried in Letters From Iwo Jima. Is that such a bad thing?’

“King makes no apologies for the way studios use his name to sell tickets. ‘Do you really think people think Larry King is a movie critic?’ he asks. ‘Come on! I’m the guy on CNN who liked the movie. I mean, after Roger Ebert, how many film critics could I even name? Joe Morgenstern. The guy with you. [The New York Post’s] Lou Lumenick. [The New York Times’] A.O. Scott. I mean, how many people in Dubuque, Iowa, know any of those guys?”

“You can’t even put King in a roomful of critics without all hell breaking loose. When I called Morgenstern Friday to let him respond to King’s gibes — he said he was ‘honored to be deplored by Larry King’ — he told me King had caused a scene that very morning, taking cell-phone calls in the middle of a screening of the upcoming film Breach. After a barrage of complaints, King went outside, only to have his phone go off again after he returned. ‘There was almost a brawl,’ reported Morgenstern.

“When I asked about the incident, King was apologetic. ‘But it was urgent. They were important calls, things I had to respond to. I didn’t talk on the phone for more than a minute or two.'”