I always respected the late Barry Goldwater, the conservative Arizona Senator and 1964 Republican Presidential candidate, for being more candid than most politicians and especially for sticking to his philosophical guns at all times. But after seeing Julie Anderson ‘s Mr. Conservative: Goldwater on Goldwater, an L.A. Film Festival selection that’ll have its nationwide debut on HBO on 9.18, I’ve come to realize he was a man of even greater substance than I knew. 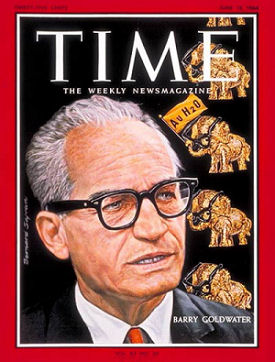 The movie, produced by C.C. Goldwater (the senator’s granddaughter) and Tani Cohen , is an engaging, wholly successful attempt to remind the public who Goldwater really was in terms of core beliefs and personal integrity. The basic message is that by today’s standards, and particularly over the last 25 or 30 years of his life, Goldwater sounded more and more like a liberal. And from my leftie perspective, that’s reassuring.

I somehow never realized until today that Goldwater literally despised Richard Nixon. We’re told that when former Nixon’s White House counsel John Dean, a friend of Goldwater’s son Barry Jr., came to Goldwater for advice prior to testifying in front of the Senate Watergate Committee in April 1973, Goldwater told him “that sunovabitch was always a liar so go ahead and nail him.”

There’s an anecdote about Goldwater being denied a chance to play golf at a certain country club back in the ’50s because of his Jewish name, and that he replied, “Well, I’m only half-Jewish from my father’s side so what if I play nine holes?”

There’s the acknowledgement of Goldwater being the father of the modern conservative political movement, but also reminders that he started to become more and more libertarian after Ronald Reagan‘s election. He believed that abortion and sexual persuasion were private matters and that the government had no right to say anything about them. He said in the late ’80s that religious right types were “a bunch of kooks.”

A few years later he urged Republicans to lay off President Clinton over the Whitewater scandal, and he also criticized the military’s ban on gays.

“You don’t have to be straight to be in the military,” he reportedly said. “You just have to be able to shoot straight.”

Barry, Jr., says in the film that his dad gave him two points of advice about his then-penchant for hound-dogging: “One, keep it out of town. And two, if you don’t get lucky by midnight, go home and get a good night’s sleep.”

Barry Goldwater was probably one of the purest guys to ever succeed in big-time politics, and this film reminds you what a rare and exotic and truly noble bird he was.