I’ve mentioned repeatedly that I’m a total fool for color photography taken during the shooting of classic black-and-white films. Today I happened upon this snap of Fred Zinneman and crew shooting the breakup scene between Deborah Kerr‘s Karen Holmes and Burt Lancaster‘s Milt Warden during the filming of From Here To Eternity in Oahu. The shot below was taken by yours truly in May 2001 during a break from my coverage of the Pearl Harbor junket. The location is Halona Cove on the southeast coast of Oahu, where the famous sexy beach love scene between Lancaster and Kerr was filmed. 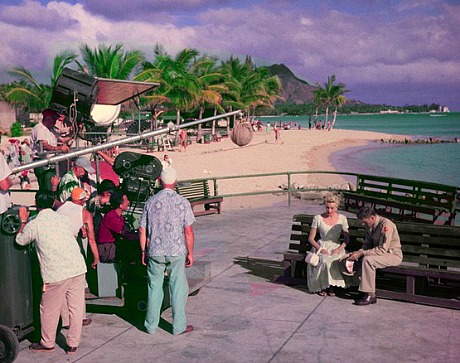 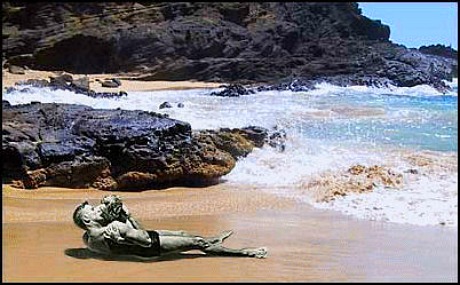 Karen: Dana’s being sent back to the States. He’s sailing next week. He wants me to go with him. What’ll we do? When do you think you’ll get your commission?
Warden: I didn’t put it in. I filled it out, but I didn’t sign it. I took it out of my desk a dozen times, but I couldn’t sign it.
Karen: (dismayed, disbelieving) Why? But…but it was the plan! It’s been weeks. You can’t just say you’ll do a thing and then not do it.
Warden: Karen, listen to me.
Karen: But why didn’t you do it? Why didn’t you tell me?
Warden: Karen. I’m no officer. I’m an enlisted man. I can’t be anything else. If I tried to be an officer, I’d be putting on an act. I just can’t do it. Please don’t ask me why. 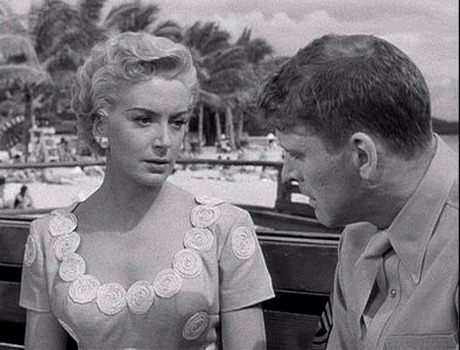 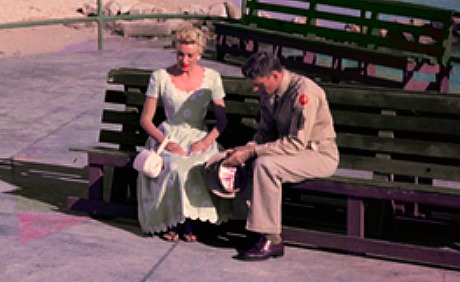