Longtime Oscar telecast producer Gil Cates keeled over last night in a UCLA parking lot (he reportedly taught at the UCLA School of Theatre, Film and Television) and passed into eternity. My condolences to family and friends. He was 77 years old, and very well liked and by almost every indication a fine fellow. 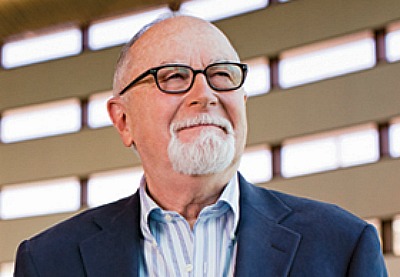 Cates also directed features and TV movies, of course, and was a fairly good one in his day. His creative peak as a director happened between ’70 and ’74 when he made I Never Sang For My Father (’70), Summer Wishes, Winter Dreams (’73) and a TV movie of Arthur Miller‘s After the Fall (’74)

Cates produced 14 Oscar telecasts between 1990 and 2008, and if truth be told over the last ten years Cates had become a symbol of the been-around-forever Academy fraternity that has enforced the schmaltzy, status-quo aesthetic and personality of the Oscars, which came to be seen as a bit fogeyish and dissipated by the under-40 set.

Here’s an excellent interview that Cates gave to DGA Quarterly’s Jeffrey Ressner. It ran last summer. There’s a great story at the end about a kind of rapproachment between Orson Welles and Robert Wise with Cates as the middle man.

Dying in a UCLA parking lot on the way back from a class is a fine way to go if you ask me. Not at home or in a hospital but in the midst of doing something, living to the fullest, actively striving, etc. People who work and produce right to the end get a gold star in my book.

When death comes I want to be strolling down a Paris street on my way back from a great meal or a bar or a party. I want to expire while lying flat on a Paris sidewalk (somewhere in Montmartre would be nice) as I look up at the stars and hear the distant roar of cars and scooters and take one final whiff of that sublime night air.

Sidenote: It must in all fairness be recalled that Cates and producer Lou Horvitz did a horrible thing on the February 2005 Oscarcast when they failed to run a special tribute-montage to the great Marlon Brando — probably the most influential actor of the 20th Century, a God, a sphinx among men — and instead ran a special tribute to former Oscar host Johnny Carson. Because Carson was better liked and Brando was a pain in the ass.

Hands down this was one of the most shameful moments in the entire history of the Oscars, right up there with giving the Best Picture Oscar to Driving Miss Daisy, Around The World in Eighty Days and The Greatest Show on Earth.

I never got over feeling angry about the Brando diss. Here’s how I put it the next day:

“There’s no question Marlon Brando was the most influential actor of the 20th Century. No one had the same impact-grenade effect…nobody. He’d been among the deity of reigning pop icons for as long as I can remember (along with Humphrey Bogart, Elvis Presley, James Dean, Marilyn Monroe, et. al.), and he’ll still be there 50 years from now. He rewrote the damn book.

“But he was a bad (indifferent?) politician and a bit of a self-loather, and he let his unresolved screwed-up stuff define too much of his life and image over the last 45 or 50 years, and Johnny Carson, whose departure happened just recently, was better liked by the industry and public, and he was a sublime Oscar host all those years.

“And so Oscar show producers Gil Cates and Lou Horvitz took the politically easy road and revealed their personal colors, not to mention the industry’s basic value system, in their decision to pay a special extended tribute to Carson and not Brando.

“Cates and Horvitz lumped the great Marlon Brando in with all the other dear and departed during last night’s ‘In Memoriam’ tribute…all right, they gave him the last slot at the end of the montage and used four stills instead of one or two…but it was like someone saying matter-of-factly, minus any sense of sufficient sadness or reverence, Marlon Brando is merely dead.

“The Brando tribute reel that Cates and Horvitz didn’t show (and probably never even cut together) should have proclaimed — trumpeted — that Marlon Brando lived.

“He lived and screamed and wept and re-ordered the universe as people knew it in 1947 in New York City, and then rocked Hollywood in the early to mid ’50s, and left them both in a state of permanent shakedown and reexamination by the time of his effective departure from creative myth-making in 1954 or ’55….and then he shook things up again when he briefly re-emerged as The Man in the early ’70s.