Right out of the effing blue, Tom Sherak — the former AMPAS president, Revolution Studios honcho and 20th Century Fox distribution chief — has died of prostate cancer at age 68. Earnest condolences and hugs to all who knew and worked with and loved him. Tom was a brilliant player, a wise strategist, a consummate diplomat. He knew the ropes and always told the truth if you asked for it. He was kind and genuine and straight. I’m very, very sorry to hear this. A shock, a wallop. 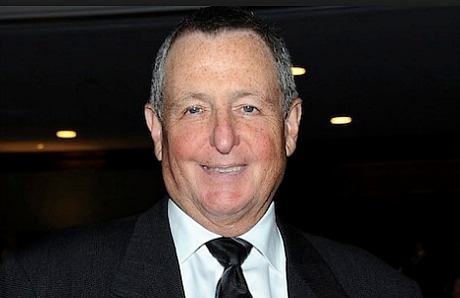 Tom came out to my film class (i.e., Hot-Shot Movies) in ’96 to talk about The Crucible and marketing movies, and the audience loved him because he sounded like an unpretentious regular-type guy. A subscriber who attended that night told me that Sherak “was really cool because he talked like Joe Pesci…he didn’t talk like some smooth know-it-all.”

In ’94 or thereabouts Sherak inadvertently gave me a tough but valuable assessment of my phone manner. I was a reporter for Entertainment Weekly and the L.A. Times Syndicate at the time, and I sometimes tended to be a little pushy with my questions. At the end of one chat we said our goodbyes and then for some reason I didn’t hang up right away. Sherak didn’t either. I heard his assistant say something about my pushy manner, and Tom said, “I know, I know — he doesn’t listen.” Wow! That hurt my feelings but guess what? I listened. From that moment I resolved to turn down the aggression and adopt the manner of a priest in a confessional. From then on I was determined that no one would ever again say I’m a pushy asshole. So thank you, Tom, for helping me to be a slightly better journalist and perhaps a better person.