Leon Gast‘s Smash His Camera, the HBO doc about the legendary, fearless, pain-in-the-ass paparazzo Ron Galella, does a solid, professional job with the usual portraiture. Who he is and was, career recap, what his friends and detractors think and remember, etc. It’s smart, tight, well assembled.

But the most intriguing thing Smash His Camera does is underscore — prove — one of the more intriguing philosophical points made by Marlon Brando‘s Col. Walter E. Kurtz in Apocalypse Now.

Describing some thorny-tough Vietcong he’d fought in Vietnam, Kurtz said “you have to have men who are moral, and at the same time who are able to utilize their primordial instincts to kill without feeling, without passion, without judgment…without judgment! Because it’s judgment that defeats us.”

Replace “kill” with “take pictures of celebrities” and that’s a pretty good summary of Galella’s approach to his rather sleazy profession. He doesn’t judge himself — can’t, won’t, doesn’t know how. And for what it’s worth, he seems like a relatively happy guy. Partly because he does what he does with real feeling and passion. He loves his work.

For decades Galella’s rep among celebrities — including, in their day, Jackie Kennedy and Marlon Brando — has been (a) he is/was New York’s most famous and notorious celebrity photographer, and (b) is/was some kind of Ultimate Insect — an obnoxious thief, invader, stalker, mosquito.

But their scorn doesn’t get through to him. You can see that in his manner and words. Either he’s incapable of understanding what people find infuriating about a paparazzi pest, or he’s shut down that part of him that could understand it. 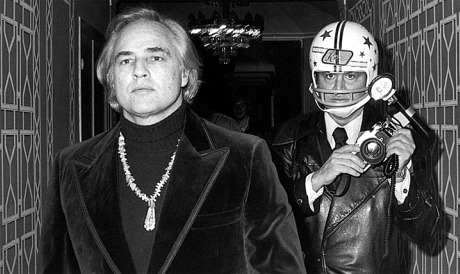 For the last 40-plus years Galella has presented himself as just a regular New Jersey guy (cannoli-eater, a bit of a primitive, lacking sophistication, not well-educated) who does what he does and gets paid for it, period. He could be a brick-layer or a cab driver, except he lives in an ornate Tony Soprano house and has questionable taste in furnishings and God knows what else.

But he’s a king in his world — renowned, successful — with his photographs published in books and shown in galleries woldwide. And all due (or at least partly due) to the fact that he’s never undermined himself with doubts or concerns. A lesson in this?

In an age in which every paparazzo shoots digitally, Galella — 79 years old — appears to still be shooting on film. Strange. He has a darkroom in his New Jersey home, just like the one that David Hemmings‘ character has in Blow-Up. Quaint.

Smash His Camera will begin showing on HBO on Monday night at 9 pm.