“Never overdramatize things. Everything can be fixed. Keep a certain detachment from everything. The important things in life are very few.” — former Italian Prime Minister Giulio Andreotti, whose political career, particularly the events that led to revelations about his ties to the Italian mafia and reported complicity in the murder of a journalist, is dramatized in Paolo Sorrentino‘s Il Divo. 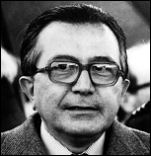 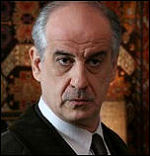 Wisdom, or a semblance of same, sometimes comes from very odd places. There’s nothing very admirable about the Andreotti portrayed in Il Divo — an uptight, coldly calculating Machievellian politician of the highest (or lowest, as the case may be) order. But since hearing the above lines during Thursday night’s screening, I haven’t been able to shake them. It’s almost become a kind of mantra to me. A way of fending off life’s unruliness that I’ve considered and agreed with in discussions from time to time, but hearing the above spoken by actor Toni Servillo (whose performance as Andreotti is somewhere between a marvel and a hoot) led to some kind of “aha!” moment.
Since Thursday night I have become, as far as this approach to life is concerned, an Andreotti convert of sorts. As far as dealing with life’s hassles is concerned. Be cool, don’t get all cranked up, there’s always a way through it. Call me Darth Implacable.
I seem to recall Oliver Stone saying something to the effect that the experience of making Nixon led him to admire or at least appreciate some of the virtues of Richard Nixon. The big-time politicians with the darkest souls have frequently passed along some very choice pearls, it seems. The wit and wisdom of Ferdinand Marcos, Josef Stalin, Pol Pot, etc.
Il Divo hasn’t a prayer of betting distributed in the States. As Variety‘s Jay Weissberg noted in his 5.23 review, the film’s “sole drawback is that non-locals will feel inundated by names, most of which are familiar only to Italo auds…this is a brave, bold film whose chances of international success are relatively small, but whose ramifications are huge.”
He called Il Divo “a masterpiece for Sorrentino…an intensely political film so wildly inventive and witty that it will become a touchstone for years to come. Pic features an astonishing degree of craftsmanship and a towering performance by Servillo.”
I knew I was seeing something intensely audacious and stylistically exciting, but the political arena it depicts is so dry and complex and wholly-unto-itself that gradually the film makes you feel as if you’re lying in an isolation tank. Most of the journos I spoke to after the screening expressed admiration for it, but at the same time confessed they weren’t all that drawn in, a result of the syndrome Weissberg described.