Gotta Believe, Gotta Feel A Touch of Soul….Or It’s Nothing 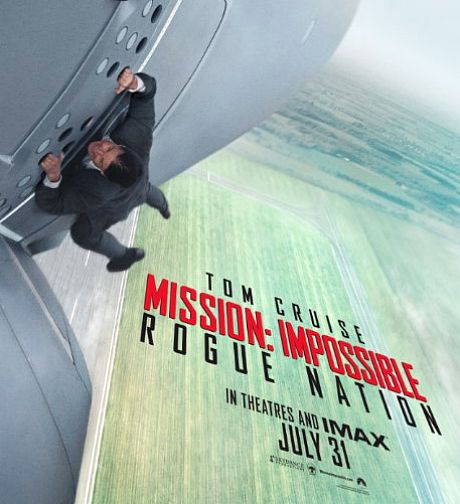 I wish I could say that I didn’t sense the noxious Furious 7 aesthetic at work in MI:5, but I did. “What’s wrong with silly, stupid fun?” they all ask. What’s wrong is that once you get past the cheap-thrill aspect, movies like this are deflating and toxic to the soul. They’re anti-realism, anti-danger software because you know it’s all bullshit, anti-engagement and anti-everything else except for a sense of costly, soul-less, high-digital whammo and, of course, the locked-in certainty that everyone involved in the making was very well paid.

As noted, MI:5 has a great beginning and a mostly satisfying final 20% to 25%. But the remainder, or roughly 73%, did two things. One, it drained my soul and two, it gave me a pounding headache. It’s a movie that cares much more about delivering gotchas and fake-outs than turning you on or — perish the thought! — making you feel a wee bit invested. Most of the idiots out there go to popcorn movies trying to guess the ultimate outcome or at least figure out who the liar is or what will happen in the next scene, and MI:5 is operating strictly on their level. Hah!…didn’t see that one coming, did ya? 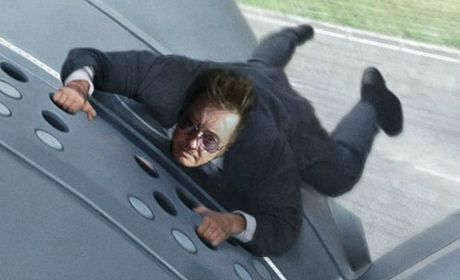 It has the usual technical polish and latex masks and the usual “fuck it” attitude that all the Mission: Impossible movies have had since the beginning, and I’ll give McQuarrie credit for coming up with some dense, labrynthine-bordering-on- Houdini-like-contortionist plotting and at least one hilarious line spoken by the always acidic, starting-to-put-on-too-much-weight Alec Baldwin (“Ethan Hunt is the living manifestation of destiny”) but it has a cold center.

It’s mostly a cynical mind-fuck, plot-fuck, logic-fuck, upscale butt-fuck movie with the usual disregard for physics. Wipe out on a motorcycle when you’re going 75 or 80 mph…fine! Automatic rifle fire coming at Ethan from 25 or 30 feet away as he runs down a corridor…not a scratch! Because almost all action stars in all 21st Century action films (except for Children of Men, Jack Reacher, Haywire, Fury Road and very few others) have become Robert Patrick‘s T-1000 in T2: Judgment Day.

MI:5 is a thriller about wisecracking cyborgs faking out and shooting and out-thieving and out-motorcycling and out-cold-staring other ruthless cyborgs. No soul or pulse to speak of — nothing but cold, calculating gamesmanship. Chunks of ice flowing in the veins and a vague sense of being anally penetrated in a very “entertaining” (i.e., not) way.

I was actually amused by a Vienna opera scene that combines the lunatic finale of the Marx Bros.’ A Night at the Opera with the assassination scene from the 1956 version of Alfred Hitchcock‘s The Man Who Knew Too Much. But there are way too many shifts, fake-outs and turnabouts with Rebecca Ferguson‘s character, who’s a kind of double-triple-quadruple-quintuple agent who probably confuses herself when she brushes her teeth.

I’m sure the masses will love it, but it’s all about Cruise and McQuarrie and co-scriptwriter Drew Pearce and the producers trying to top and outperform the last MI film, and the one before that and the one before that. Sorry but I felt neutered by most of it. Not angry, not irritated but fucked and fiddled with.

July 24, 2015by Jeffrey Wells27 Comments
« Previous post
“Creativity Is About Anarchy, Much Of The Time”
Next post »
Spotlight Debuting in Venice