Washington Post critic Michael O’Sullivan is calling Darnell Martin‘s Cadillac Records “a rousing, fast-paced tale, told with a modicum of verve and packed with colorfully flawed, occasionally heroic and even tragic characters. It also feels disappointingly bloated and too fast-paced by half. Cramming in that history doesn’t leave much room for — oh, I don’t know — story. 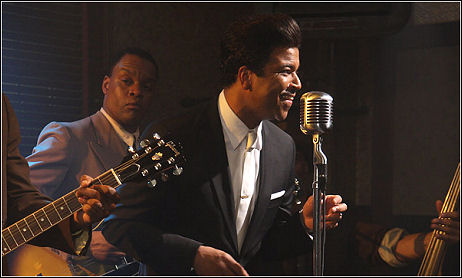 “History is propelled forward by the filmmaker’s over-reliance on such now-stale staples of musical biopics as the montage of nightclub marquees, ka-ching-ing cash registers, close-ups zooming in on the names of chart-topping singles and newspaper headlines. It’s a breathless approach, leaving little time in this speeding, noisy, overcrowded Cadillac to take in anything other than the milestones that go whizzing past.”

How, then, to explain the unqualified rave given to the film by the always observant N.Y. Times critic A.O. Scott? Because Scott seems to be into soul music big-time — his review suggests it’s been been making his spirit soar for decades — and so he’s decided to emphasize what he feels in his heart rather than nit-pick Cadillac Records to death.

Scott is especially appreciative of Jeffrey Wright‘s portrayal of blues singer and guitarist Muddy Waters. In his various portrayals of famous African-Americans, Wright “directs our attention away from the familiar, public face of the character in question toward a private zone where ambition struggles with anxiety, and where what seems to be at stake is nothing less than the integrity and viability of the self,” Scott observes. “And so, in his Muddy Waters, we see pride, ambition and uncertainty cohabiting with musical genius, sexual appetite and stubborn professionalism.”