Granik’s Latest Is A Bust

I didn’t “hate” Debra Granik‘s Leave No Trace, but I bailed around the two-thirds mark. I am therefore not panning Granik’s father-daughter drama altogether. But I really didn’t give a shit about watching a quietly seething asshole dad (Ben Foster, who else?) insisting on living in the damp, chilly woods with his intelligent, coming-into-her-own teenaged daughter (Thomasin Harcourt McKenzie).

I saw no charm, no appeal, nothing intriguing in this absurd approach to life and living. It’s one thing to live without TV or smartphones, but eating mushrooms and shitting in the woods without toilet paper? 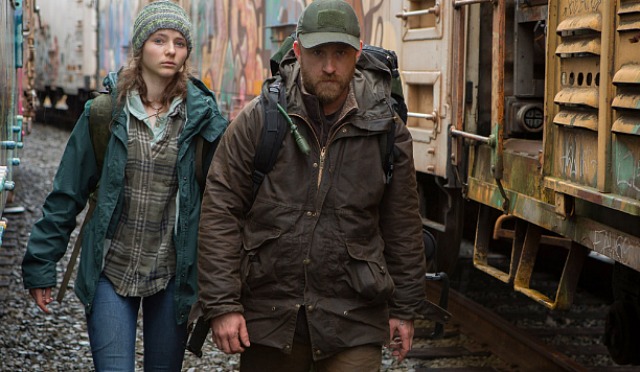 I’ve never liked Foster much to begin with. Does he do anything besides play intense wackjobs?

Really, what possible good can come from hanging with another naturalist asshole a la Viggo Mortensen‘s dad in Captain Fantastic? Seriously — fuck these pater familias and their oppressive, Thoreau-like parenting theologies. Poor McKenzie is becoming curious about the world and wants to socialize a bit and maybe see what it’s like to have a boyfriend, but her scowling dickhead dad, whose damaged background Granik can barely be bothered to explain, wants none of it.

So after the authorities intercede at the end of Act One and try to prompt Foster to allow his daughter a chance to adapt and socialize and find her way into a structured, work-oriented rural life, Foster’s Will says “c’mon, daughter, we’re going back to the pine cones.” He loves her, but what a hopelessly deranged prick. Of course his daughter will stand up to him and go her own way by the end of Act Three — we knew that going in.

So I was sitting there telling myself “I can write something based on the 65 minutes I’ve seen thus far…I just have to admit that I left before it ended.” And that’s what I’ve done.