“Very much in line with recognizable Oprah Winfrey mandates, The Great Debaters promotes literacy and articulateness, highlights the significant oral tradition in black storytelling, crams in as many factual details and statistics as time will allow, and depicts a society that, however impoverished and oppressed, valued knowledge and education,” writes Variety‘s Todd McCarthy in his 12.18 review. 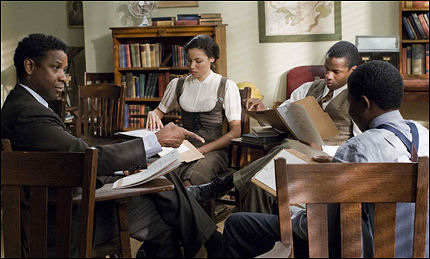 “Above all, pic illustrates that the civil rights movement didn’t just spring out of nowhere in the 1960s, but was preceded by nearly a century’s worth of innumerable small, brave, mostly unknown steps.
“As agenda-driven and well-scrubbed as the film may be, that’s already a lot to pack into a straightforward narrative and doesn’t even include the story’s most unexpected sidelight — the implication that the revered English teacher and intellectually incisive debate coach, the real-life Melvin B. Tolson (played by director Denzel Washington), was a radical labor organizer and possible communist.
“The first notable element for contempo audiences is how well-dressed, polite and well-spoken everyone onscreen is; the era’s profound deprivations notwithstanding, the constant supply of freshly cleaned clothes is impressive. Even more striking is how the rural students — who, when they debate, wear tuxedos — toss off Latin phrases and quotations from James Joyce and D.H. Lawrence with the casual insouciance of Oxford lads. Who knew?”