Luis Bunuel‘s Belle de Jour (1967) “has a reputation for being one of the sexiest films ever made, simply because Catherine Deneuve behaves throughout like a pre-adolescent girl. Through the prism of the 21st century, the film seems oddly contrived; what is now a cliche — the child who, subjected to the sexual advances of an adult, then becomes a frigid woman who is only turned on by squalor — is coyly exploited as a series of fetishistic images that juxtapose her fantasy life with her actual life. 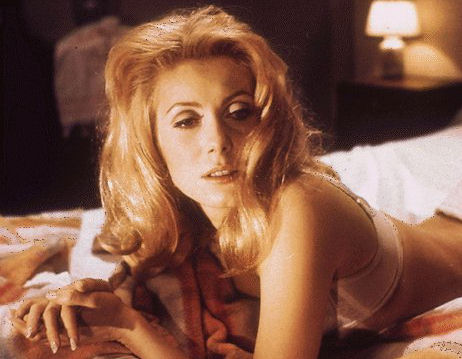 “As Severine Serizy, Deneuve moves through the imagery of what are meant to be her own fantasies like a sleepwalker. By her own account, Bunuel could not relate to her at all and never told her what he wanted. Unconsciously, she gave him what he wanted, which was as little as possible. The fantasies were his, after all.
“The decision to have her dressed by Yves Saint-Laurent adds a bizarre dimension to the nonexistent plot; we seem to be living within the pages of a glossy magazine, with product placement everywhere. Everywhere Severine goes, she is conspicuous by her catwalk presence, from her shiny patent leather pumps to the helmet that holds in her mane of Barbie-doll hair.
“The sex scenes in the brothel consist of her stripping to the full armour of suspender-belt, knickers, stockings and padded brassiere, and allowing ugly men to kiss her. In one extraordinarily unsexy sequence, she is required to process through the rooms of a ducal chateau dressed in nothing but a cloak of black georgette and a crown of white roses. She trots ahead of the camera like a lamb to the slaughter. She should have used a body double; it is typical of her passive obedience that she didn’t.
“Lauren Bacall would never have done that for anyone, would never have stripped and had them shoot her bare arse from the back as she trotted through take after take. The Hawksian woman would have decked any man who asked her.” — from a thoughtful, somewhat revisionist Guardian piece by Germaine Greer, the subject being the decline of the feisty broad.