Better Than What Crosby Described

Update: On 6.28 Joni Mitchell’s conservator, Leslie Morris, posted the following about Mitchell’s condition following a HuffPost quote from David Crosby that said (a) Mitchell had suffered an aneurysm and (b) was not able to speak. To my knowledge Morris never used the word “anuerysm” before Crosby mentioned it, and you could bet she wouldn’t have mentioned it otherwise.

“Joni did in fact suffer an aneurysm,” Morris’s statement says. “However, details that have emerged in the past few days are mostly speculative. The truth is that Joni is speaking, and she’s speaking well. She is not walking yet, but she will be in the near future as she is undergoing daily therapies. She is resting comfortably in her own home and she’s getting better each day. A full recovery is expected.”

Previously: Until this morning the word “aneurysm” has never been used to describe what happened to Joni Mitchell on 3.30. I can certainly find no record of her court-appointed conservator Leslie Morris having used this word. Is David Crosby Mitchell’s doctor? No, but one presumes, given their shared history and closeness over the decades, that he has access to good information. 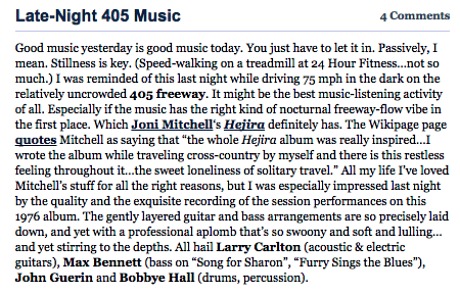