Guns, God and the NRA

I’ve never seen this column as strictly movies- and-nothing-but. Each and every wind and current in American culture routinely blows into the entertainment industry and back out again — it’s what makes it extraordinary turf. Movies are the basic concern, of course, but yesterday’s Virginia Tech massacre felt like a major tremor, and I probably should have responded in some small way, as some readers wrote yesterday. 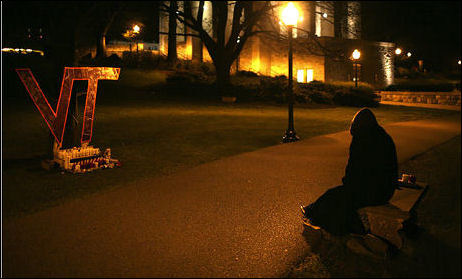 The gist of some postings was how could I be angry about the alleged 170-minute length of Pirates of the Caribbean: At World’s End with such a terrible real-life tragedy reverberating every which way?

The banal truth is that I was caught up in lots of other stuff yesterday (investigating video-conversion and editing software in the morning, an interview with La Vie en Rose star Marion Cotillard at the Four Seasons in the mid-afternoon, an early reception and then a premiere screening of Rose at the DGA) and so I only managed three postings.

Yesterday’s shootings were shocking, ghastly, horrific. Like everyone else I was shaken and saddened. But was anyone genuinely shocked by this? Another guy with easy access to firearms went postal. The body count of 33 (i.e., 32 victims plus the shooter, Korean student Cho Seung-Hui, taking himself out at the end) made it obviously worse than Columbine, but this kind of thing happening is not exactly a major mind-blower, given our history and especially given the easy access to firearms that some people in this country are still working hard to enforce.

Michael Moore will tell you that the likelihood of such a massacre happening in Canada is much, much lower than in this country, and he’s right, of course. A guy named Cho Seung-Hi lost his mind yesterday, but why do we support the right of almost any nerve-jangled psychotic to purchase enough guns and ammo to lay waste friends and family and work communities with relative ease?

European journalists “seem to agree about one thing,”a 4.17 Spiegel Online report says. “The shooting at Virginia Tech is the result of America’s woeful lack of serious gun control laws. Papers reserved their sharpest criticism for the 2004 expiration of a 10-year ban on semi-automatic weapons under the then Republican-controlled Congress. Others comment on the pro-gun lobbying activities of the NRA [i.e., National Rifle Association].”

The pro-gun lobbyists are the principal bad guys, of course, but a certain roundabout responsibility must fall on the entertainment industry. What money-making activity, after all, is more soaked in blood and shootings and all manner of horrific death than movies and video games? Movies have repeatedly sold the idea of the potency of firearms. They have certainly dramatized the scenario of a lone good guy (i.e., one who’s been wronged in some way) settling a score by shooting a lot of bad guys. We all love suspense and good action, but there has to be something wrong with you to really enjoy depictions of callous sadism and homicidal bloodlust.

One thing I couldn’t stand yesterday was a statement from President Bush yesterday (or from a Bush spokesperson) that said in part, “We ask a loving God to comfort those who suffer today.” Oh, I see….the loving God who steps in from time to time to give people heavenly hugs when awful things happen, but who most of the time steps back and sits on his hands and allows the human tragedy to fulfill itself according to natural immutable law?

I despise right-wing Christians who try to personalize the perfect cosmic unity of all things great and small by giving this wondrous order an earth-bound personality, and then portraying this entity as having some kind of compassionate agenda regarding earth-people affairs. God is in every man, every deed…in every bloody catastrophe and every act of random kindness. He/She/It doesn’t “root”….hello? I don’t want to be judgmental, but people who can’t grasp this elemental concept have, due respect, some kind of emotional or psychological blockage.

I’m especially taken with the fact some of these same right-wing Christians (Bush among them) happen to be major supporters of the NRA.