Had To Be Done

The boys and I visited the Dachau concentration camp memorial early yesterday afternoon. It’s located 9 miles to the northwest of Munich. You take a subway (about a 20 minute ride) and then grab a bus or a taxi when you hit town. It’s surprising when you reach the entrance, which is located on a fragrant, curving, tree-lined street. Maybe 150 visitors were there, some with tour guides. At first it feels like you’re walking into a large, well-tended city park. It’s attractive. And then you get to the main gate. 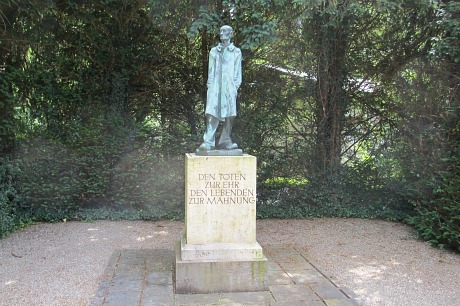 The words on the base of the statue, translated into English: “To honor the dead, to admonish the living.”

How can you visit a place like this and not feel sickened and somewhat depleted? I felt like I wanted to nap minutes after I began walking around the grounds. My system was feeling the odious signals and just wanted to shut down and escape, I guess. Obviously going there was not about me but about them. But I was thinking all kinds of tedious and banal thoughts. Some kind of blocking mechanism?

The main pebble-covered yard separating the German command and SS barracks and the area where the prisoner barracks stood is flat and wide and quite vast. Only two barracks — simulations of the actuals — remain on the grounds; only the gravel-based foundations of the rest remain. We saw it all and felt as much as we were able. Some 31,000 people were killed there. I was imagining what it might have felt like to be stuck at Dachau in the ’30s and ’40s, and how it might’ve felt to survive on a day-to-day basis. I can never know, of course, but my imagination was aflame and then some.

The ceiling on the gas chamber in the main crematorium building, located on the extreme southwest corner of the grounds, is quite low. The gas-dispensing “shower” holes on the ceiling were only eight or nine inches from the top of my head. There was one small window near the cement floor, covered with hard-metal chicken wire.

I couldn’t take any shots. The thought of raising my camera occured two or three times, and then it went away. At the end I forced myself to take a shot of a statue of an inmate (the model was Kurt Lange, a gay guy who served two “rehabilitation” sentences), and then one of the entrance.

Last night I read about the Dachau massacre, and I felt very, very gratified to read that after the camp was liberated in late April 1945, some U.S. soldiers gave handguns to some of the prisoners and allowed them to go to town on some of the SS guards.

We met a young Turkish guy at a food stand near the Dachau train/subway station, and his friendly personality and general vibe were really nice. “You from California?,” he asked. “Yeah, Los Angeles.” He has a brother in California, he said. “What town?,” I asked. “I don’t know, just California,” he said with a shrug and a smile. He’d obviously love to visit. It could have been anyone, but it was just beautiful on a certain level to meet and talk with him a bit. Some people just have an aura. 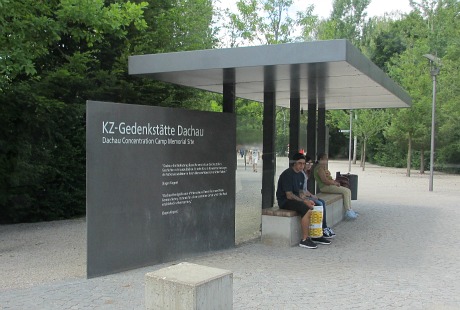