Contrary to Glenn Kenny‘s belief, The Wire‘s Esther Zuckerman hasn’t panned The Wolf of Wall Street. She calls it “a well-acted, well-directed, well-written film.” She just can’t roll with the bacchanalian debauchery that constitutes a good portion of its length. She’s ethically offended, in short, warning that Martin Scorsese‘s film “will be idolized for all the wrong reasons.” She’s entitled to her view, of course, but she’s aligning herself with the harumphs who’ve been dissing it for all the wrong reasons. “I guess, at the tender age of 23, I’m just an old fogey,” she writes within air quotes, “but Wolf left me feeling sick to my stomach, and not because the movie condemned [Jordan] Belfort‘s world, but because it seemed to love it.” 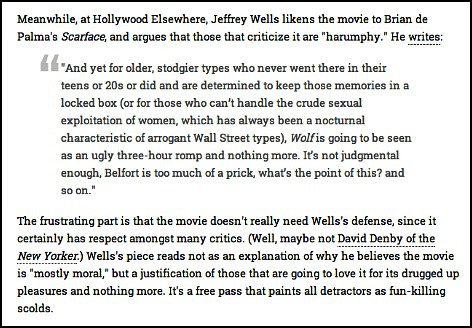 Zuckerman tries to make it sound like I’m primarily approving of Wolf because it allowed me to revisit my irresponsible druggie days. That was a portion of it, yeah, but not the bedrock. She needs to re-read what I said, and also take a gander at my HE Sink-In piece about Wolf that appeared last night.

I’ll lay it out again. The film gives viewers a series of euphoric charges (unless you’re Zuckerman or Lou Lumenick or David Denby) and then throws it back in our laps and says, “Really? This is what you are? This is what you really want?” The very last shot in the film, which Zuckerman doesn’t mention, is Scorsese’s final statement.

The Wolf of Wall Street strategy is twofold. One, to make a clear moral point about Belfort and his buddies being (a) bad guys and (b) metaphors for the giddy indulgence of the general Wall Street crowd and the one-percenters who’ve benefitted from the concentration of wealth and depletion of a strong middle-class (which has been happening since the ’80s but especially over the last 15 years, and which is pointed out in spades by Inequality For All). And two, to try and seduce the audience in the same way Belfort seduced his employees and his dumb sucker clients. Rather than deliver a moralistic lecture piece, which Scorsese obviously could have done if he thought that would work, he decided to put the audience into Belfort’s shoes and make them grappple with the issue on a gut level.

And if she doesn’t like that explanation, Zuckerman could listen to what Wolf costar Matthew McConaughey said earlier today at the Four Seasons luncheon in Manhattan. (Thanks again to Bill McCuddy for sending this and two other quotes to me earlier today.)