Frozen River‘s Melissa Leo was handed the Breakthrough Actor trophy at last night’s Gotham Independent Film Awards, and River itself won the Best Feature award. With Leo also looking like a front-runner for a Best Actress Spirit Award, it is now up to the Academy to recognize reality (both artistic and political) and hand Leo a Best Actress nomination as well. 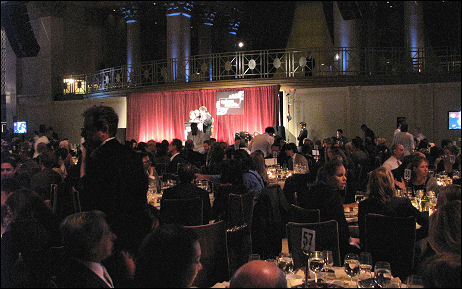 Tribute awards were given to Penelope Cruz, HBO ‘s Sheila Nevins (who asked me during the pre-party to please stop gesturing sharply with my hands, as one of my karate chops came very close to her head), and directors Gus Van Sant and Melvin Van Peebles.

The organization behind the east coast Gothams is the Independent Feature Project (IFP). The west coast Spirit Awards, which are handed out in February just before the Oscars, are run and fortified by Film Independent (FIND). IFP and FIND used to be the same outfit, but they divorced in 2006 over some issue involving organizational ego and bluster and territoriality. 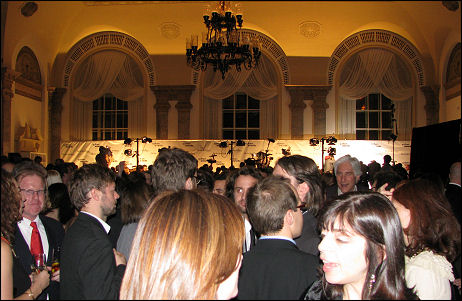 I attended the Gothams at Cipriani Wall Street as well as the pre-party at the Museum of American Finance, which are right across the street from each other. (Wall Street is quite narrow, like a driveway.) I ran into several familiar faces — Richard Jenkins, Bob Berney, Melissa Leo, Fox Searchlight’s Peter Rice, Marina Zenovich, Roger Friedman, Michael London, Susan Norget, Jonathan Demme, Jeff Goldblum, Rosemarie DeWitt, Gus Van Sant, the Ballast guys, etc.

I actually arrived a bit early, which isn’t my style. I wore my black suit, tapered medium blue dress shirt, a plaid-y checkered blue-gray tie and a pair of deeply uncomfortable, Chinese foot-binding Aldo loafers that I’m thinking of giving away. The pork chop hors d’eouvres at the pre-party, served with a tangy mustard sauce, were luscious. Ditto a very flavorful sea-foody omelette that was served as an opening appetizer at Cipriani Wall Street.