There will be no hating on Adam Shankman‘s Hairspray (New Line, 7.20) by me. It’s a spunky early ’60s musical with “fun” performances (i.e., spirited by way of pronounced insincerity), dead-on retro clothes and hair styles, some well choreographed musical numbers and a few laughs here and there. The trick is to watch it without getting bored or suffering a major migraine. I was going through my usual movie-agony spasms (leaning forward, hands covering bottom half of face, quiet groaning, frowning) but I’m a sorehead who doesn’t get musicals, right? 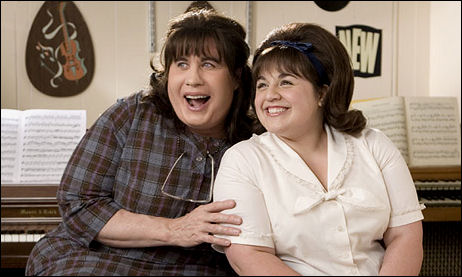 Hairspray is wafer thin, full of shit, repetitive and broader than a barn door but it won’t give you cancer or indigestion or anything along those lines. Standards are always put aside when a robust musical comes along and says with a wink, “Do you get where we’re coming from? That we’re all about singing, dancing, winking and arched eyebrows within the prism of early ’60s nostalgia and culturally refer- enced air quotes? Of course you do! So relax and enjoy.”
The fact that Hairspray is a mildly amusing one-note crock isn’t bothering the critics so far. (It has a 100% Rotten Tomatoes rating as we speak.) They’re calling it entertaining goodtime fizz because (a) their taste buds are corroded or (b) they know the middle-class mall crowd loves easy-to-get retro jukebox pablum, and they don’t want to risk seeming elitist or clueless. Or both.
The original 1988 John Waters film of Hairspray (not a musical) was pat and shallow in a mocking-retro sort of way, and the Hairspray B’way musical was the same thing with big-heart songs and dance numbers. Now comes a big-screen musical version that follows the drill with a John Travolta fat-suit performance that’s moderately okay, a spunky lead-girl performance by Nikki Blonsky and a couple of good-sport turns by Michelle Pfeiffer and Christopher Walken so…what’s not to like? It’s fine. 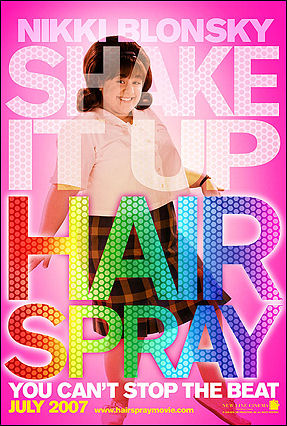 Which it is. As long as you don’t mind totally pissing away the time it takes to watch it. As long as you can roll with the fizz and the bullshit and the gay Tin Pan Alley attitude. When it comes to musicals I’m more into Once or Hair or Cabaret or Carousel. Shows that came from something strong and real in the first place, and aren’t so much into going “wooooh!”
Hairspray is set in a 1962 Baltimore that existed in some ways (the hair styles, clothing, cars and sets are perfect) and never existed in others. Cute bubbly fat girls like Blonsky (the truth is that she’s dangerously obese) never, ever hooked up with slim good-looking guys back then. (It doesn’t happen today either.) People who knew good music were into Little Richard and Jackie Wilson, but interracial socializing was rare and interracial dating wasn’t noticable until the late ’60s. The movie has the surface details down, but too much of the inside stuff is fanciful tripe.
Blonsky plays Tracy Turnblad, a perky high-schooler who dreams about dancing and becoming famous on a local rock-music dance show called the Corny Collins Show. Her mom Edna (Travolta) is more obese as Tracy, and her good-natured dad (Walken) runs a quirky toy and curio store. Tracy has the hots for Link Larkin (Zac Efron) after laying eyes during an audition to replace a Corny Collins dancer. Her relationship with Larkin pisses off the frosty blonde Amber Von Tussle (Brittany Snow) and her frosty blonde mother Velma (Michelle Pfieffer) somewhat, but what really throws them off-balance is Tracy’s notion that the white-bread show should allow black kids to dance also. 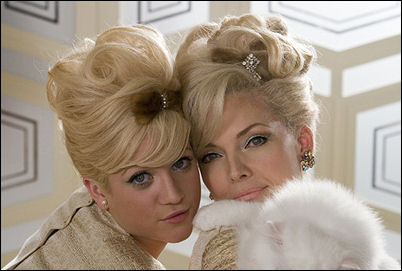 Blonsky is very good and talented and likable, but she looks like a smiling little beach ball in a cartoon. I realize I’ve got a rep of being Jabbaphobic, but I really and truly don’t have a problem with largeness as a rule. Plump is cool and fat happens, but extreme obesity is an affliction. Am I lying? To me a seriously obese person is like a drunk staggering around with a bottle of Jack Daniels.
Travolta has been telling interviewers that he tried to play Edna as a real woman and not as a guy giving a drag performance. That’s true as far as it goes but it’s mostly smoke because Travolta isn’t the maestro here — Shankman is — and the scheme of the movie blocks any interest in real-people behavior. Edna emotes within the broad-ass emotional framework of a stage musical, but there’s a ceiling with this kind of thing.
The bottom line is that you have to understand, agree with and follow certain rules of engagement in order to enjoy Hairspray. Maybe the reason I couldn’t have fun is that I understand the rules all too well.