I’ve finished 80-something pages of Quentin Tarantino‘s Inglorious Bastards script and while it’s easy to see why others have called it Kill Bill meets The Guns of Navarone meets The Dirty Dozen meets Cinema Paradiso, I have to say that I’m mainly enjoying it as a violent, vaguely art-filmy World War II attitude comedy — a deliberate exploitation piece full of war cliches turned on their ear, and a general theme of Jewish payback upon Nazi swine for the Holocaust. 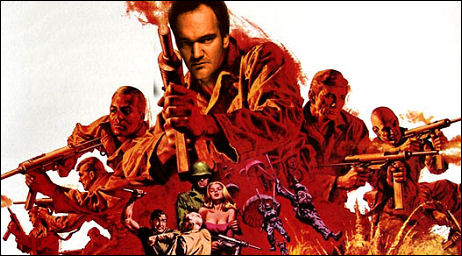 It is absolutely the most inauthetic, bullshit-spewing World War II movie that anyone’s ever written. And I love it, love it, love it for that. Every other line is a howl or a chortle. It almost could have been written by some 15 year-old suburban kid who used to play pretend WWII games with his friends when they were 10 or 11. Four or five times I literally laughed out loud, and that’s rare for me. And every scene is pure popcorn, pure shit-kickin’ Quentin, pure movie poontang.
When I read the character name of “Pvt. Butz,” a German combat soldier, I almost fell out of my chair. This is straight out of the mind of Stanley Kubrick when he called two hotel-clerk characters in Lolita “Mr. Swine” and “Mr. Putz.”
Chris McQuarrie‘s Valkyrie script plays it straight and authentic, and is what it is, love it or not. But the Inglorious Bastards script flaunts its fakery and movie ‘tude to such a degree that it’s pure adolescent (i.e., teenage boy) pleasure. The Europe it depicts doesn’t exist and never will exist, and that’s totally fine. The German and French characters are so idiotically cliched they almost sound like the kind of material that a John Candy SCTV skit would use. But not quite. It’s actually kind of perfect that way. The balance, I mean.
The script of Inglorious Bastards seems twice as fake as the Italian villlage in Blake Edwards‘ What Did You Do in the Warm, Daddy?, and that was pure mid ’60s Hollywood bullshit. It’s faker than Hogan’s Heroes, even. If Tarantino has done any research about France, Germany or any World War II particulars other than watch World War II movies, I’ll eat my motorcycle tool kit.
He doesn’t care, of course, and that’s why he’s Quentin Tarantino You can feel him in his element, living in his head and flaunting a clever, dumb-ass yarn that entertains every step of the way, and — this is the cool part — in a kind of oddly sophisticated fashion. Which is what he’s been doing since Pulp Fiction. 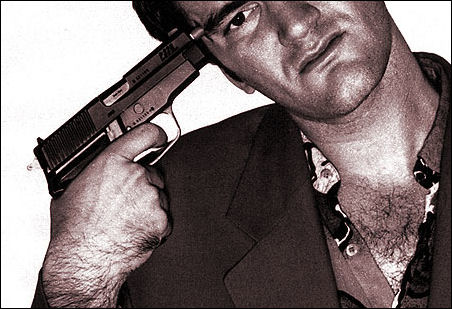 The spelling errors, I have to say, are a complete howl. Something in me refused to believe that Tarantino is just a spelling moron. He’s either an idiot movie savant of some kind, or he sat down and decided to deliberately misspell stuff in order to give the people reading it a little tickle. Toying with them, flaunting his supposed illiteracy, but doing it to a degree that it almost seems a wee bit insincere. That said, the errors may be dead real, and if so it’s almost impressive on a certain level. Tarantino could have easily told a freelance editor to clean up the mistakes. The fact that he didn’t spells confidence.
Over and over he writes “heer” rather than “Herr,” the German name for mister. He writes “merci be coupe” when he means “merci beaucoup.” There’s a line that goes “the Feuhrer himself couldn’t of said it better ” when he means “couldn’t have said it better.” He tries to pluralize the French-Jewish family name Dreyfuss to great comic effect. We are told that the Dreyfuss family includes a mother named “Miram” and a brother named “Bob.” (“Hey, Bob, get me one of them there quawssaunts, would ya?”)
He spells Dr. Goebbels as Dr. Gobbles….gobble, gobble! (And then he spells it “Geobbels” later on.) Tarantino seems constitutionally incapable of typing the word “you’re” — he has to write “your” every time. We’re told at one point that “there gonna die” instead of “they’re gonna die.” Adolf Hitler is described as a “manic” instead of a maniac. Time and again people in Hitler’s company address him as “mine Feuhrer” instead of “mein Feuhrer.” We are told that German soldiers have “brought the world to there knee’s” instead of “brought the world to its knees.” Not long after this QT uses the word “wennersitnitzell,” by which he means “weinerschnitzel.” (I think.)
This is too dumb, too hayseed. It has to be a put-on.

And then comes an American GI character from Boston named Donny who carries a baseball bat and has come to be known as…I won’t say it, but it’s genius-level. (And I’m not being snide.) The nickname for Brad Pitt‘s Lieutenant Aldo is Aldo the Apache. (Because of his penchant for scalping Nazis.) There’s a great scene with a German Sgt. Rachtman being interrogated by Aldo and his men, each one of the Hebrew persuasion, and Rachtman being asked where some nearby German troops are holed up, and he answers….I can’t say this either, but it’s brilliant. Okay, I’ll say it — “fuck you and your jew dogs!”
We’re introduced to Jewish characters named “Mr. Goorowtiz” and “Mrs. Himmelstein”? These are names from a ’50s comedy skit on Your Show of Shows or The Jackie Gleason Show. Over and over it’s “Basterds” this and “Basterds” that — why is the “b” capitalized? At one point a character is asked, “How did you survived the ordel?” (This is an exact transcription.) Tarantino even spells “gimme” wrong — “gimmie.”
I could go on and on, but this script — again — is pure relish, pure pleasure and pure money. Everybody and his uncle will get the humor, and it’ll generate serious dough all around. It’s too bad Harvey Weinstein‘s company can’t afford to fund the film on its own (as Nikki Finke has reported). If the budget doesn’t go too high Bastards will almost definitely turn a profit, with which the Weinstein Co. could help to pull itself out of a financial hole. Considering that Tarantino’s Grindhouse help out the company in that hole, wouldn’t that be the decent symmetrical thing?