The ending of Rescue Dawn “is triumphant, with [Christian Bale‘s] Dengler surrounded and cheered by his comrades,” writes New Yorker critic Anthony Lane. “This is accurate enough — the man himself confirmed it in the documentary — and yet nobody watching the freeze-frame of Bale’s grin, and hearing the thudding surge of the musical score, would guess for a second that this is a Werner Herzog film. 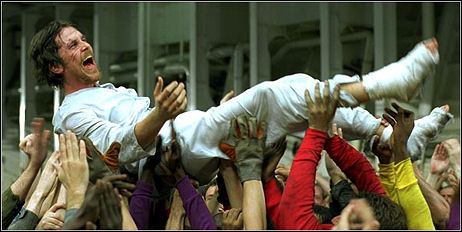 “I wouldn’t go so far as to call it a Michael Bay moment, but in its mood — the solid pomp of emotional relief — it slides into the groove of Uncommon Valor, Behind Enemy Lines and other mainstream parables of men lost and found. Most of Herzog’s previous films were made by his own production company; this one was made partly by Top Gun Productions. What is going on?”
My sentiments exactly as I was walking out of a Rescue Dawn screening at the Toronto Film Festival 10 and 1/2 months ago.