All right, somebody needs to find the Criterion staffer who thought up the rabbit clue in the latest newsletter and slap him around. The words “WUV’ and “ATE” on the rabbit’s fingers are obvious allusions to “LOVE” and ‘HATE” tattooed on Robert Mitchum‘s fingers in Charles Laughton‘s Night of the Hunter, meaning that a Criterion DVD/Buray of this 1955 classic is in the works. 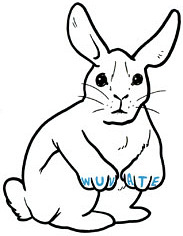 Why a rabbit in the first place? Because rabbits are frequently hunted or something? No, some guy says in the thread. Mitchum’s nickname as a kid, he claims, was “Robbie the Rabbit.” Sure thing.

Presumably the footage titled “Charles Laughton Directs Night of the Hunter,” that two-hour look at rushes and outtakes that were part of almost eight hours worth of footage that Laughton’s widow Elsa Lanchester donated to the AFI, and which UCLA helped to restore, will be a part of the package. I saw a good chunk of this footage in Los Angeles, although I forget where and when. A couple of years ago, I think, at the Billy Wilder in Westwood or at one of the American Cinematheque houses.