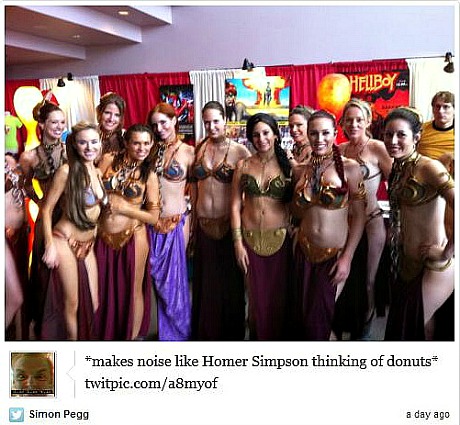 In other words, in Stoker’s view, Pegg wasn’t getting with the spirit of ComicCon cosplay and degrading the environment by conspicuously smacking his lips and sounding like LexG/Ballsworth. I get what Stoker is saying but c’mon…a couple of dozen women in harem costumes and Pegg is a sleazebag for noting that harem-girl attire has a certain effect upon his libido? Pegg replied to Stoker by saying “it was not my intention to offend and I am against the objectification of women when the intention is malicious…chums?” And Stoker responded “if you’re actually against it, apologize.”

A guy is always asking for trouble, of course, if he says anything in a public forum that objectifies women or alludes to their sexual allure in any lewd way. It’s unwise to go there. But the point of a harem costume, of course, is to sexually titillate or arouse. The reason George Lucas told Carrie Fisher to wear a harem costume in that Jedi sequence is because it would be sexually titillating or arousing to the Star Wars fan base. The reason women wear Princess Leia harem costumes to ComicCon is because they know that sexually titillating costumes always get attention, and that a certain portion of this attention (if not the bulk of it) will be prurient in nature. They know that going in so Pegg’s reaction, however obviously he expressed it, was more or less precisely what they were expecting if not looking for.