Today (Friday, 10.4) is Peter Sarsgaard Meditation Day, if you want to think like that. You know…thoughts of who he is and how sharp his mind is, what he’s got stewing inside, what that easy smile and those hooded eyes really indicate deep down, where’s he’s heading.
Sarsgaard, 34, has two new movies opening today — Jarhead, a Waiting-for-Godot- ish Gulf War drama in which he plays Troy, the hardest and truest Marine of them all…an intense embodiment of the modern deballed warrior…and The Dying Gaul, in which he plays a gay screenwriter involved in a sexual-ethical muddle with a big-studio executive (Campbell Scott) who wants to make a movie of his script, and the executive’s curiously frustrated wife (Patricia Clarkson). 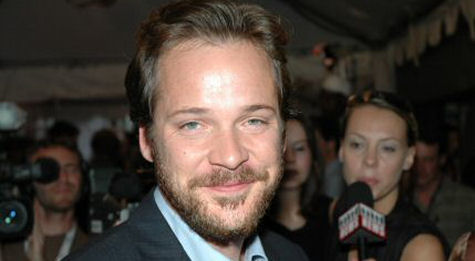 Both of Sarsgaard’s characters are given to internal suffering, which he conveys with his usual particularity. A lot of actors are good at subtle conveyences, but Sarsgaard is always fascinating when most of the energy is being pushed down and there’s relatively little to do. He doesn’t ever seem to say, “Look at me”…but you can’t help doing that.
He can also be riveting when asked to go in the opposite direction. There’s a start- ling, almost-on-the-cusp-of-being-too-much sexual scene in Gaul that proves this and then some. It’s “honest” in a way that almost no other actor I can think of would be willing to touch.
< ?php include ('/home/hollyw9/public_html/wired'); ?>
I wouldn’t call either performance career-altering, but they’re a reminder of what everyone has come to realize about Sarsgaard over the least couple of years, which is that he’s an exceptional violin player, and that one day the right music and the right conductor are going to come along and…wham, out of the park.
Being an obsessive type, I keep wondering when Sarsgaard is going to play another quietly heroic, morally grounded role…a guy who knows much more than he’s saying, whose intelligence you can sense right away…another sympathetic, Chuck Lane-in-Shattered Glass type…a struggling 30ish guy with brains and integrity…maybe given to a little anxiety at times, maybe a sharp glance or two, but a guy you want on your team.

Like any artist with any kind of bravery, Sarsgaard doesn’t believe in repeating himself. He’s into discovery and twisting the dials in such a way that the audience is prodded into new territory, and would almost certainly find some way of saying “uhm, I don’t think so” if a producer were to take him to dinner and say, “I want you to do that again.”
But Sarsgaard is that guy…I think. That guy and then some. And he’s a lot more intriguing in person than what he is (or has been given to do) in his new films, not because the movies are shitty but because real-life conversation can sometimes turn your mind around in ways that performances can only poke at.
Sarsgaard “has become this year’s go-to guy by holding his feelings in check,” the Newark Star Ledger‘s Stephen Witty wrote today. “What exactly is going on behind those sleepy eyes? Sly and knowing, Sarsgaard’s characters always seem to be privy to some secret information…something always feels closeted.”
“As Robert convulses with wrenching emotional seizures, Mr. Sarsgaard gives the riskiest screen performance of his career,” wrote New York Times critic Stephen Holden. “Save perhaps for Sean Penn’s outbursts in Dead Man Walking and Mystic River, no actor in a recent American film has delivered as explosive a depiction of a man emotionally blasted apart.”
And yet Sarsgaard’s essence as a performer, I think, is about strength. He’s the guy who gets everything, who sees through every last dodge. That’s what those hooded eyes say to me…not malevolence, not some prickly loser attitude, but supreme perceptional confidence. In a friendly, non-arrogant way. 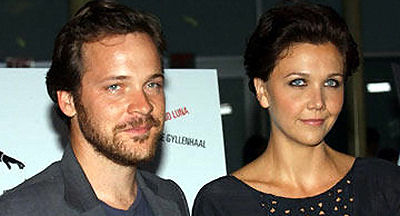 It’s right there in that settled gaze and slight smile. I know, he’s saying. You know …we both do. You want me to tell you? I can but…we don’t need to play games, do we?
I met Sarsgaard late Wednesday afternoon near his place in the West Village, adjacent to Hudson Square.
My moody little fucking IPAQ 3115 didn’t feel like recording, but I remembered a few things without notes. Here’s a random sampling of topics explored at a little Italian place on the corner of Jane and West 4th Street.
He’s taller than he seems to be on-screen, and a bit fuller of face (especially with the beard) than he was in Shattered Glass. It may be an act (and wouldn’t that fit the whole picture if is is?), but his manner is about as easy and gracious as it gets.
Sarsgaard took some time off about doing four ’05 films in a row — The Skeleton Key, Flightplan (in which he played the villain), The Dying Gaul and Jarhead. He’s only just starting to read scripts again.
He can wait for the right ones to come along. He doesn’t spend his money (he drives a ’91 or ’92 car) and is under no financial pressure to do anything.

He’d like to play likable, sure, but he doesn’t get sent the pick-of-the-litter scripts (i.e., the ones that go to Tom Cruise, Bard Pitt, et. al.) and he often winds up getting offered this or that outsider-malcontent type. He’s pretty clear about which films are right for him and which aren’t, he says.
He’s loosely collaborating with Dying Gaul director-writer Craig Lucas on a new film project, although his input has been mostly in the vein of saying “this works” or “that doesn’t seem right” with Lucas doing the heavy lifting.
There’s a lot of concentration that goes into doing press junkets, he feels. He suggested to Jarhead costar Jake Gyllenhaal that he check out Albert and David Maysles’ Meet Marlon Brando (’66), a 28-minute doc about Brando doing press interviews for Code Name: Morituri in ’65,and never really getting into the promo- tional frame of mind, talking about this or that…an excellent behavioral guide for any actor looking to keep his/her dignity during a press junket.
His girlfriend Maggie Gyllenhaal is just starting work on Oliver Stone’s 9/11 movie, and Peter doesn’t claim to know too much about the when, where and how…not his deal.
After finishing shooting on The Dying Gaul, Peter and Maggie took a trip to Sicily but at one point decided to divert to Rome to visit the statue of the Dying Gaul (also known as the Dying Galatian or Dying Gladiator) in the Capitoline Museum. They stayed at Rome’s Hotel de Russie.

A thought hit me during our chat that Sarsgaard (especially with his beard and all) would look right as an 1860s cabinet officer and Union military guy in Steven Spielberg’s Abraham Lincoln movie, which is supposedly going to begin filming in March ’06 with Liam Neeson in the lead.
We parted company around 6 pm, partly because Sarsgaard had to make it up to the Beacon Theatre to see Rufus Wainwright perform. He’s also a fan of a Rasta- farian group called Midnite (apparently they only perform in the wee hours). He later suggested my checking out two of their tunes on I-Tunes — “Propaganda” and “Mamma Africa.”
Check out this IMDB chat board showing that Sarsgaard has some revved-up female fans, with some singing his praises as a “soft” non-sculpted hottie.
Regular reader Dixon Steele wrote in this afternoon after reading an earlier, choppier version of this piece and said, “Peter Saarsgard is a very talented actor, always interesting…and I don’t think I’ve ever seen him in a total clunker.
“But on top of that, he gets to sleep with Maggie Gyllenhaal every night! Damn!! For that alone he gets our respect (and envy!). Maybe it’s the Double-A thing in their names.”
Acknowledgment: Special thanks to our friends at DigitalHit.com for allowing me to use the Sarsgaard photo at the top of the page. 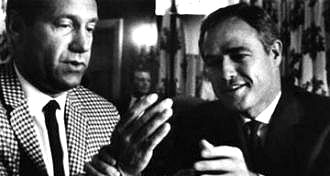 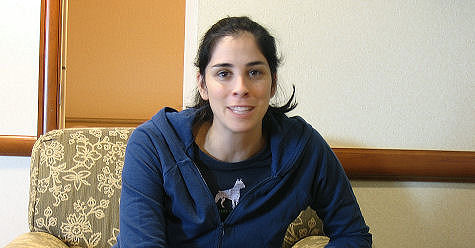 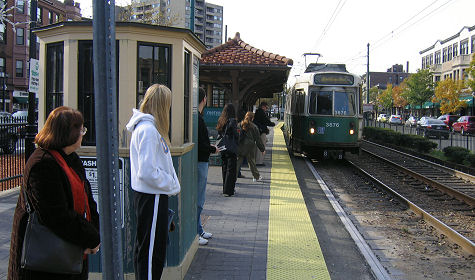 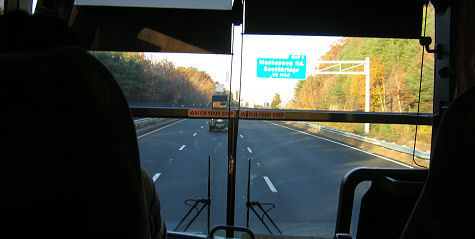 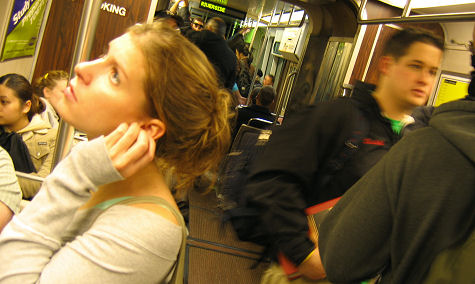 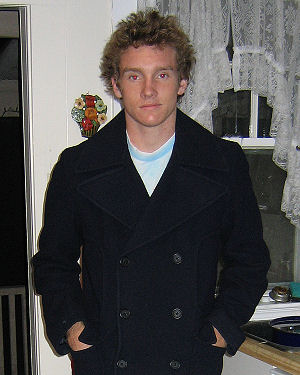 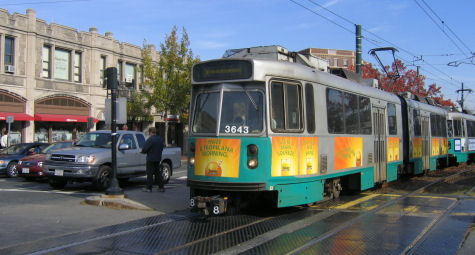 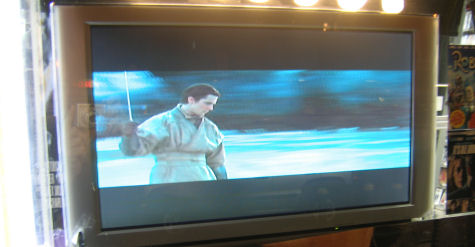 This is what I mean by widescreen TV idiocy, and I see it everywhere. Batman Begins, a 2.35 to 1 scope film, is stupidly misconfigured on this 16 x 9 screen — vertically, nonsensically compressed. The morons who set up hardware displays in electronics stores are always doing stuff like this, and when you mention it to them they always go “huh?” 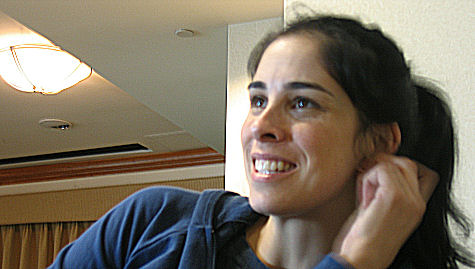