David Thomson, who is usually my favorite film critic-essayist, has written another huge anthology work (somewhat similar to his The New Biographical Dictionary of Film) running 1024 pages called Have You Seen…?: A Personal Introduction to 1000 Films (Knopf). It won’t hit the stores until 10.24, but uncorrected proofs have been sent out, and I’ve been sinking into my copy with pleasure off and on or the last 48 hours or so. 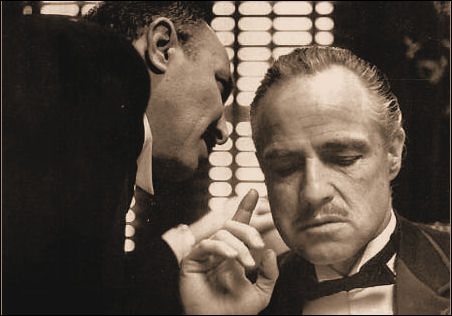 The book is basically about Thomson going back to each and every film and making them seem curiously fresh and vital again. (And therefore necessary to see once more.) Each re-review and re-assessment runs four or five long paragraphs, and are composed with such smooth and clever assurance that you can knock off 25 or 30 in a single sitting and then return the next day, hungry for more. At no point do you have a feeling that he’s recycled past writings (even if he has here and there).
Here’s a two-paragraph taste of his page 17 take on Aliens:
“Generally speaking, the industrial strategy known as franchising — of doing sequels until the end of time — was a disaster in the 1980s and 1990s. But every now and then, something quite wonderful came of the plodding method. If you put Alien and Aliens side by side (and it may be one of the last great double bills in American film), you get not just the thumping and very satisfactory sequence of prolonged combat after great unnerving threat.
“You also get the emergence of the secret love story in these Alien pictures, the way in which no matter what happens in her movie career, Sigourney Weaver is never going to meet a more faithful lover than the creature. Indeed, its only rivals were the gorillas in the mist.
“Ripley comes back from the first film like Sleeping Beauty in her spacecraft. She looks lovely still, but the journey has taken fifty-seven years. She is brought back to Earth’s drab reality, but she has nightmares. And then she hears that the planet that [Alien‘s] Nostromo went to — it is called LV-426 now — has a small community of miners on it, a few families. And now, as Ripley comes home and wakes after fifty-seven years, the regular signal from LV-426 cuts out. Is there a clearer way the Alien has of calling to Ripley?” 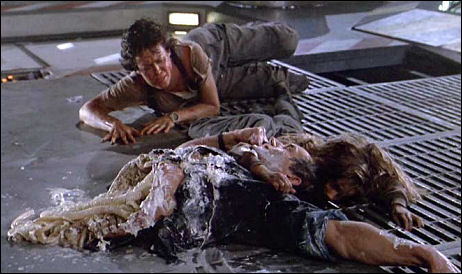 The only thing missing is at least a glancing acknowledgment of the eight-year tragedy of Aliens director Jim Cameron — a guy who was good and imaginative and tough enough to make this film, both Terminator movies, The Abyss and Titanic over a brilliant 13 year stretch (’84 to ’97) and then….nothing.
Cameron is back on it now, somewhat, but for at least eight years he retreated into a kind of rich-man’s sandbox retirement that involved a lot of deep diving, a 3-D documentary, more diving and a lot of kicking back. In short, a complete abdication-renunciation of what he had it in him to do — a Napoleonic retreat from the task of creating smart and exciting movies that matter.
The navel-doodling that guided Cameron from ’98 to ’05 (or ’06) was, for me, shattering. Where would the world be if other men and women of strength and vision in other fields followed Cameron’s example? Think about that.