In relatively honest fashion, Film Jerk‘s Edward Havens attended a research screening of an allegedly “truncated” version of Andrew Dominik‘s The Assassination of Jesse James by the Coward Robert Ford (Warner Bros., 9.21.07), although it’s hard to think of any 140-minute film as truncated. 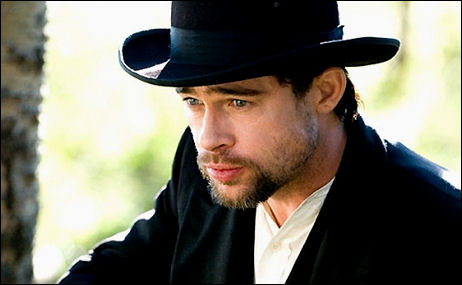 I have to confess to profound disappointment in reading that Jesse James, like Blade Runner, uses narration and, in Havens’ view, will be “a tough nut to crack if you’re not paying total attention, words I am certain the studio would never want to hear, even though they had to know exactly what they were getting into when they greenlit this film.” I hate, hate, hate narration. The only time I’ve really loved it was in Terrence Malick‘s Badlands and Days of Heaven and maybe four or five others.
Nonetheless, Havens is a rapt admirer. He says it’s all but guaranteed a place on his list of ’07s Best Films of the Year upon its opening in late September. He says that Brad Pitt, as Jesse James, turns in the best performance of his career since 12 Monkeys, and yet ” this is not his film. It is Casey Affleck, as Robert Ford, who owns the screen by the time the film is over.”
The Assassination of Jesse James by the Coward Robert Ford “doesn’t try to reinvent the western as much as bring back to the same kind of timelessness which have made The Searchers or “The Wild Bunch or the westerns of Clint Eastwood favorites for generations. Twenty years on, Young Guns feels like even more like the tired ’80s movie we knew it was when it was first released. Twenty years from now, this film will not be a victim of its time. It will be still be watched and benefit from the attempt to not chase what is hip or hot today.
“No matter what shape the final film takes, I suspect it will emerge as the best film the genre has seen since the days of Sergio Leone and Sam Peckinpah. Yes, The Assassination of Jesse James by the Coward Robert Ford is better than Unforgiven. Better than Dances with Wolves. Better than Silverado or Wyatt Earp or any other Western in the past thirty years. I cannot wait to see it again.”