Indiewire columnist Anthony Kaufman recently passed along a two-pronged statement from producer Ted Hope about The Hawk Is Dying, the somewhat morose Paul Giamatti movie that opens at Manhattan’s Cinema Village tomorrow (on 3.30). Hope said Hawk is now in better shape than when it played to lousy reviews at Sundance 2006, and that he’s so proud of it that “if you go and aren’t truly glad you went, I will personally refund your money…just send me your ticket stub at This is That in New York…I promise.” 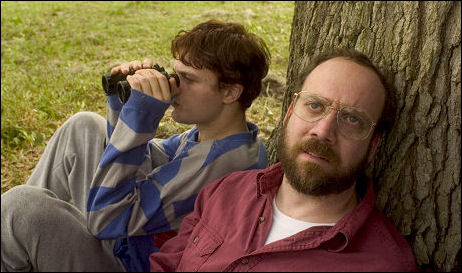 I saw the Sundance version of Hawk, and it’s nothing close to the kind of film that might prompt anyone to demand a refund. What it is, or was when I saw it, is a movie that lulls you into a nice meditative calm, and then (if you’re running on less than five hours sleep the night before) slumber. I started thinking about catching a snooze very soon after this film began, and the impulse was at least partly about content. It didn’t seem a huge concern — I’ve become disciplined enough at sleep- ing during festival films that I can make myself wake up every ten minutes just to keep up with the plot.

The Hawk is Dying is basically about delusional losers putzing around. It’s not an embarassment, and I don’t see it hurting Giamatti’s career. We all have to work and pay the bills, and sometimes we work with friends for the wrong reasons, and moviegoers understand this, I think.

Set in the south, Hawk is about an owner of an auto upholstery shop named George (GIamatti) who lives with his grotesquely fat sister and her mentally challenged son Fred (Michael Pitt). George is into training falcons, and the footage of him capturing and training a red-tailed falcon is…uhm, educational. And intended as a metaphor about finding vigor and passion and overcoming the mundane stuff.

But any movie that makes a Giamatti performance seem dull or running on empty is definitely doing something wrong, and Pitt really needs to play an average guy soon. Someone who smiles and wears clean clothes and brushes his teeth and talks in complete sentences. Pitt always plays barely articulate zone cases, and I’m starting to wonder if he can do anything else. And if you add a grotesquely fat character of either gender (even in an unobtrusive supporting role) you’ve got an oh-for-three situation. 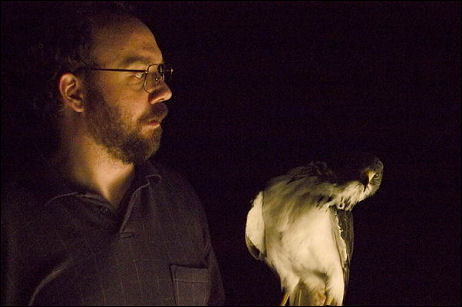 “The film truly deserves to be seen on the big screen,” says the indefatigable Hope. “We are woefully close to a time when such films will only be available for download, but this, like many others, truly deserves to be seen with light passing through glorious celluloid. I know you know how crucial the early days of a film release are, so please if you don’t have plans for the end of the month, do all you can to get to Cinema Village (or wherever it is playing near you).

“It captures a tour de force performance by Paul Giamatti, raw and incredibly human. [Director Julian Goldberger’s expressionistic style is so well suited to Harry Crews’ tale (his first novel to make it to the screen), both are reinvented in the process. Ten years ago, this would be a film celebrated by the entire industry, but now that indie means something synonymous with the ‘cinema of quality’ that the French New Wave rebelled against so long ago, it gets marginalized precisely because of the wonderful risks it takes — the same very risks that made me and the great team that worked on it want to collaborate with Julian in the first place.

“I do love the phrase (perhaps slightly ironically) ‘vote with your dollars’, but I do think a ticket here is a vote against a steady diet of Norbits and Wild Hogs,” Hope adds. “I truly struggle every day on how we can make sure there is a business that can work that embraces challenging films, films that dare to aim towards art, that involve risk as part of their design. And of course, the key part is all of us buying tickets.”