Heart In The Right Place

Is it okay if I like Super 8 (Paramount, 6.10) for the stuff that really matters and not so much for the scary-spectacular CG hoo-hah? Super 8 was greenlit because of the latter, of course, but what matters most to me (and, I suspect, deep down, to director JJ Abrams) is the material that was woven into this Goonies-meets-Close Encounters-With-a-Mistreated-Alien-Dog film to give it heart, and to make it feel like a special Spielbergian, small-town, emotional time-machine visit. 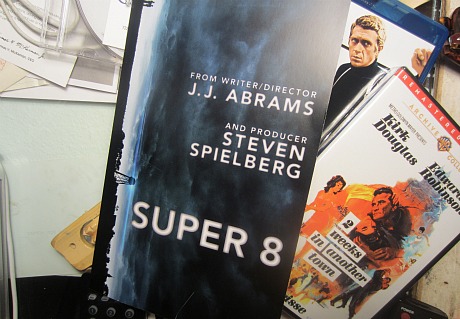 Lots of stuff is shown in Super 8 and a lot of plot teasers are thrown around, but the fundamental things apply. And what makes Super 8 worth seeing and then some are the echoes of an era in big-budget, big-studio filmmaking (20 to 30 years ago) when things weren’t quite so mechanistic and formulaic and CG-driven, when at least some effort was put into character and feeling and intimacy and plots that felt half-credible, etc. Super 8 isn’t wildly or triumphantly successful in the latter sense (certainly not in the final act), but it gets a lot of other things right. Internal, delicate things…feelings, needs. And that, in my eyes, makes it a better summer film than most.

Everyone will be talking first and foremost about how Super 8 is a first-rate Steven Spielberg tribute. And about Elle Fanning‘s knockout performance, which has already made her into the most sought-after teenaged actress in town. And the way the advanced puppy-love relationship between Fanning’s “Alice” and Joel Courtney‘s “Joe” feels almost as poignant and emotionally tangible as the one between Montgomery Clift and Elizabeth Taylor in A Place In The Sun. The urgent, argumentative repartee between Joe’s film-nut friends. Kyle Chandler‘s performance as Joe’s small-town sheriff dad (who should have been given a couple more quiet, stand-alone scenes). The always handsome, beautifully-framed and lighted widescreen photography by Larry Fong. The John Williams-like score by Michael Giacchino.

Because right away you can tell Super 8 is going to spin that ’70s Spielberg web while trying like hell to make you feel and empathize with what Joe, the 12 year-old protagonist, is going through (his mom having just been killed in a factory accident as the film begins), and make you see things through his eyes. The unfortunate part is the devil’s bargain that all big studio movies are caught up in, which is the regrettable instinct to use all kinds of familiar sound and flash and fury in order to sell tickets to justify the budget. I tolerated this aspect while feeling very much comforted by the Joe-and-Alice stuff. Presumably I won’t be alone.

This is why I suspect Super 8 will play very well with general audiences, and why it currently has an 87% on Rotten Tomatoes with Time‘s Richard Corliss calling it “the year’s most thrilling, feeling mainstream movie.”

And that’s very good because I could kick hell out of several aspects of the plot if I felt like it. I don’t care to do that, as noted, because the thing-locked-inside-the-traincar element is for the primitives, but boy, could I do a Jake La Motta-meets-Tony-Janiro on the third act! But I can’t get into it without spoiling.

The opening 20 to 25 minutes (i.e., before the train wreck sequence) really are quite captivating (for me anyway), and JJ does capture that late-’70s-to-early-’80s Spielberg vibe throughout. I think that’s what he was primarily doing here (along with recalling his own youth), and that the movie might have turned out better in a plot sense if JJ had been harder on himself by bringing in a couple of snarly, seasoned, no b.s. screenwriters…guys who would have sauntered over to Bad Robot on Olympic like Jack Palance in Shane and put their feet up on the desk and said, “Yeah, the Joe-and-Alice emotionalism and the Spielberg homage stuff is intact, but we have to sit down and address the dramatic fundamentals and make it all work without regard to paying tribute to Close Encounters and E.T and The Goonies….it has to stand on its own two feet as a movie of its own.”

“That’s exactly fucking right,” a critic friend wrote me yesterday. He complained about some third-act elements that I won’t divulge, but concluded by saying that “the ending was so bad, it soured me on the entire film…it makes absolutely zero sense. But the stuff with the kids was wonderful. It almost felt like Abrams didn’t trust himself enough to make a movie without a giant monster in it.”