Each and every time I re-review the Oscar handicapper favorites, I’m reminded that I’m constitutionally incapable of standing completely off to the sidelines and trying to guess which films and filmmakers that Academy members are favoring at the moment. I try to ask around and listen and “read the town” as much as the next guy — I respect the industry perceptions of guys like Pete Hammond as much as anyone else, and perhaps more so — but I can’t keep my own feelings and convictions out of it. The mindset of the dispassionate handicapper-statistician is too bloodless and clinical. 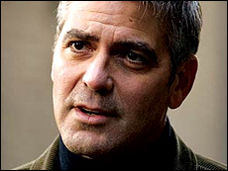 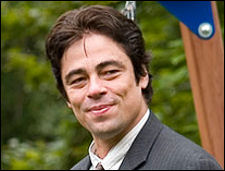 And frankly, I don’t know how anyone in this game can go 100% dispassionate and still sleep at night. You’ve got to make it personal these days. Or at least half-personal. Dispassionate reporting and sage analysis are so…print. We are all advocates. A columnist or critic is nothing without convictions and cojones that he/she is willing to lay on the line.

One of the things I love about Envelope columnist Tom O’Neil is that he predicts from his heart. He raises the antenna and puts his ear to the rails, but at the end of the day he can’t seem to keep his own passions out of the equation. That’s me also, which is why I had a mild seizure yesterday when it hit me that a majority of Buzzmeter contributors had named Michael Clayton‘s George Clooney as a Best Actor contender while ignoring — as they have been all along — Benicio del Toro‘s wings-of-angels performance in Things We Lost in the Fire.

It doesn’t matter — it can’t matter — that industry Zeligs are saying “Clooney, Clooney” because it’s just too…I don’t know what…insulated? In this context it doesn’t matter if Del Toro has the “votes” or not. The point is that his performance in Fire is at least ten or fifteen times greater than Clooney’s, and I’m saying this with a full acknowledgment that Clooney gave a sturdy, convincing, first-rate performance in Tony Gilroy‘s film. But he’s just not in the same league with Benicio, and it’s wrong, lazy and disproportionate to assert otherwise because some lazy-heads are espousing this view at parties after their second glass of wine.

The Academy chattering class (or is it really the journo-chatterers?) can’t do this, and if they are doing this it is the responsibility of the Oscar-watching columnist-bloggers to split their heads and hearts in the Wells-O’Neil fashion and say “no, it’s wrong. Just wrong. This isn’t a high-school popularity contest, and the Movie Gods will never forgive us.”

It’s all well and good to pass along what is connecting and what isn’t with industry audiences, but if these alleged favorites don’t correspond on some deep-down level with what an observer knows to be genuinely commendable or artful on some level, a columnist-observer is obliged, at the very least, to ask questions. Or, if he/she chooses, argue against the prospective nominee. You can’t just be a lamb in the field and go “baaah.”

The bottom line is not that I haven’t agreed with the calls made by the Motion Picture Academy over the years, but that I don’t respect the myopic and provincial and always political thinking that have so often part of their calls. The only thing I really and truly respect about this racket is the advertising money that comes in during Oscar season.