As a lifelong fan of Ian Dury and the Blockheads’ “Hit Me With Your Rhythm Stick“, which came out in ’79 or ’80, I’m naturally keen on seeing Sex & Drugs & Rock ‘n’ Roll, a British-made biopic with Andy Serkis as Dury. Directed by Mat Whitecross from a screenplay by Paul Viragh, it’ll probably turn up in Cannes next May…although one can always hope for Sundance ’10. 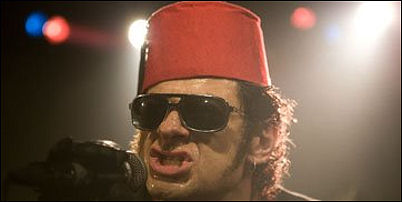 If you’ve never heard “Hit Me With Your Rhythm Stick”, please give it a listen.

I’m actually going to try to speak to Whitecross or Viragh during next week’s Fantastic Mr. Fox London press-junket visit. If they’re around, I obviously mean. (As well as try to see Michael Caine‘s Harry Brown, which opens in London next month but which I missed at last month’s Toronto Film Festival.)

Financed by Prescience, Aegis, the UK Film Council and Lip Sync, worldwide sales are being handled by Odyssey Entertainment.