I launched Hollywood Elsewhere sometime around August 20, 2004. Maybe a day or two earlier but it was right around there. I’m not much for taking bows as a rule. The 15th anniversary of this column on Mr. Showbiz happened last October and I didn’t say boo. But I’m nonetheless trying to think of some way to celebrate HE’s tenth anniversary without sounding, you know, blowhardy. It’s been a bitch but I’m very proud of having hung in and toughed it out and…well, succeeded. (I was going to say “survived with some measure of comfort” but I’ve done better than that.) The multiple-posts-per-day format began around April 2006; before that I was posting a twice-weekly column plus a forum (“Wired”) for rat-a-tat-tat items. WordPress informs that I’ve written 27,000 posts since the beginning, but that doesn’t add up if you average something like five stories per day x 365 days x ten years, which comes to 18,000 and change. I’m posting this because while I printed out some of the earliest columns I’m trying to find records of its appearance online, and so far I’m coming up blank. I’ll probably make serious hay about this when the actual anniversary rolls around. 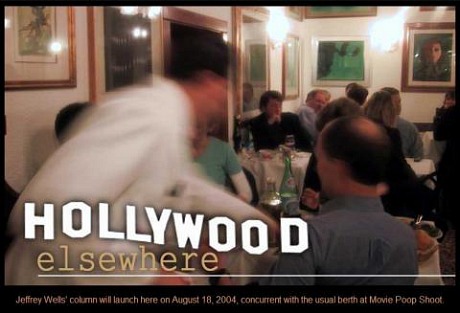